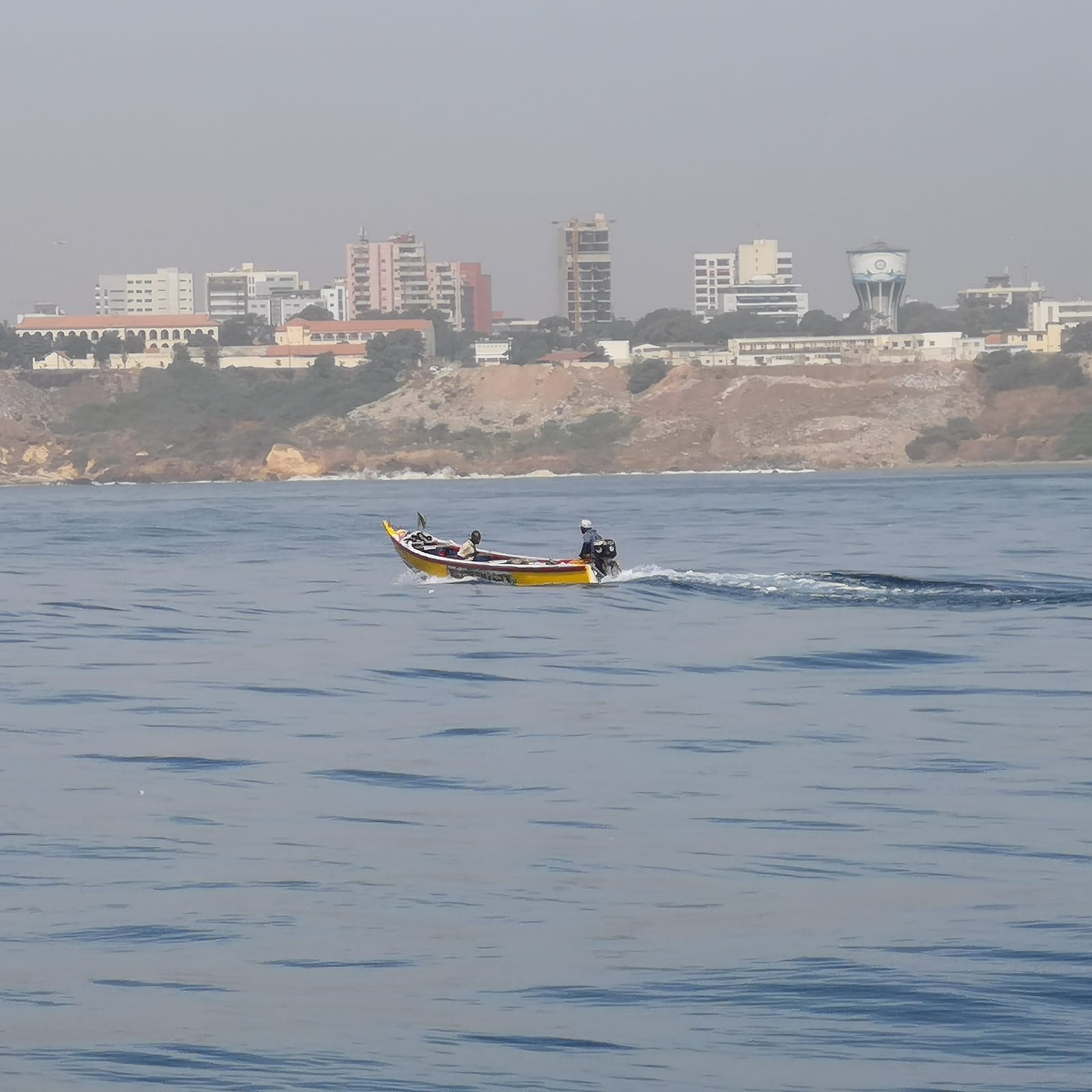 Africa smells like, well… Africa! Amazing how distinct the smell is, we noticed it miles away from land. Together with the colours and the music the smell is definitely one of the things that made a deep impression on all of us.

Except for Ric (who had spent a couple of his teenage years in Lagos, Nigeria), this was the first time that we set foot in an African country (Subsahara Africa, we have obviously been to Morocco). And we were so proud – we got there by sailboat!

Dakar is dirty, Dakar is noisy and Dakar has a serious traffic problem. Traffic here is madness, I have never seen anything like it. I heard friends tell me about Delhi and Cairo and I imagine Dakar to be similar but without any alternatives to taxi and bus (no tram, no underground transport) and in our 2 weeks there we must have spent hours in taxis, I’m not even exaggerating.

The anchorage lies to the South of Dakar and Sophie – my friend who took care of us during our stay – lives more in the North but really only a couple of km away, not that big of a deal, one would think. Except this is Dakar and Dakar’s rush hour seems to make up a big part of the day, basically from 7-11 and from 3-9. During that time it would easily take us way over an hour to get to her place. None of the taxis we took had a working taxameter, so you agree on a price beforehand after quite some discussion and negotiating and that can get exhausting after a while. And being white taxi drivers of course expect us to pay more which is fair enough. Only that we were on a very tight budget!

The overall impression at first was that it was difficult to really get in touch with the Senegalese people, we have felt unwelcome a couple of times but given the history of colonization and slavery, that’s quite understandable. But then there was Sophie who had been living in Senegal for more than 15 years and who speaks Wolof fluently, she was our door opener to the Senegalese culture and it’s wonderful people.

She showed us around, brought us to her favourite spots, introduced us to Senegalese music and food but she also filled us in about Senegalese politics and her and her Senegalese friends‘ frustration about local politicians. To give only one example: The Senegalese government has sold the countries fishing rights to other countries like China and Japan which led to Senegalese fishermen not finding anymore fish and hence fish prices have quadrupled over the last couple of years. Which again robbed many people of their perspective and took away their basis of existence. She also told us about the lack of opportunity for young people to get an education beyond primary school. All in all we were able to learn a lot about Senegal and its people. We took day trips to the former slave island of Gorée, we spend two days outside Dakar at the sea and driving quad amongst baobab trees, we visited the museum of African art and much more.

Sophie also arranged for us to stay in her best friend’s house so we could have a little break from boat life. That was very welcome, the anchorage was really quite disgusting. Some years ago the Bay of Hann must have been a paradise with white sandy beach, crystal clear water and stunning vegetation. But now with the fish market and people just dumping everything in the water and on the beach, the whole bay stinks and the water is horrific.

One time it was so bad we even woke up from the stink!

The water was so murky that we didn’t see the wreck in the anchorage (apparently no one can be bothered to mark it and we weren’t the first to hit it as we learned afterwards) and just before leaving for the Cape Verdes, we drove against it. One of the few moments of shock during our trip as we had no idea of what we had just hit and how bad it was: did we take on water? Did something happen to the keel? Jari even lost his glasses due to the impact, he had just pulled up the anchor and was still at the bow finishing up when it happened. He got thrown against the rail and his glasses slipped off his nose and landed in the murky soup – not a chance to recover them.

We were lucky, except for a huge scratch on our keel, all seemed fine.

Overall it was a fantastic experience and we just wished we had more time – as always – and a less deep keel! Senegambia is fantastic for river cruising, there are no less than 3 rivers that we would have loved to sail in (also easier with a less deep keel as there are quite a few moving sand banks) and there’s also Guinea-Bissau with the Bijagos archipelago (but too shallow for Ponyo). And then there’s the inland with so much to see and discover! We barely scratched the surface and vowed to come back.

Beware of the wreck(s?) in the Bay of Hann! If you are deep-keeled as we are you might want to wait for high tide to sail into and around the anchorage. Eyeball navigation won’t help as there’s no way of spotting the wreck, the water is way too dirty.

Considering this and the state of the showers the fee that the CVD asks for is a little outrageous, we paid the equivalent of 110€ for 2 weeks (1 boat – already includes 1 person – , 1 extra adult and 2 kids – technically our kids didn’t count as kids anymore but they were generous when I complained about the showers) but there’s little to no alternative where to anchor your boat – at least not one we know of. You might be able to anchor next to the island of Ngor which would be so much nicer and cleaner and more attractive but we are not sure how calm and safe the anchorage is as it’s much more exposed to the open Atlantic.

Ask for Momo, he’s your go-to-guy for everything you need, he’s reliable and can use the money. He helped us get water and sell stuff, we loved him!

Getting around the country: There are the 6-seater taxis („six-places“) that will take you anywhere in the country for little money, the only thing is they will wait until all seats are taken before they leave so bring some time. Dakar-St. Louis for example should take around 5-6 hours and cost less than €10 per person.

Rental cars are rather pricy and traffic can be nerv wecking so I’m not sure if I would recommend it. If you drive overland you’re also prone to police stopping you for ‚speeding’.

One word on insurance because we know of some sailors who refrained from sailing to Senegal because their insurance wouldn’t cover it. We are insured with Preuss Yachtversicherungen, a German insurance broker. We haven’t had a claim so far but as far as we had to deal with them, we were super happy and they insure Senegal and you don’t need to be German to buy insurance from them.

If you are drawn to West Africa don’t let negative hearsay stop you, we didn’t feel any less safe than in any other place, certainly not less than in the Caribbean islands – quite the opposite. We loved sailing to Senegal and we would definitely come back and spend much more time cruising the coast down to Casamance and Gambia, maybe even to Guinea-Bissau but with a less deep-keeled boat.