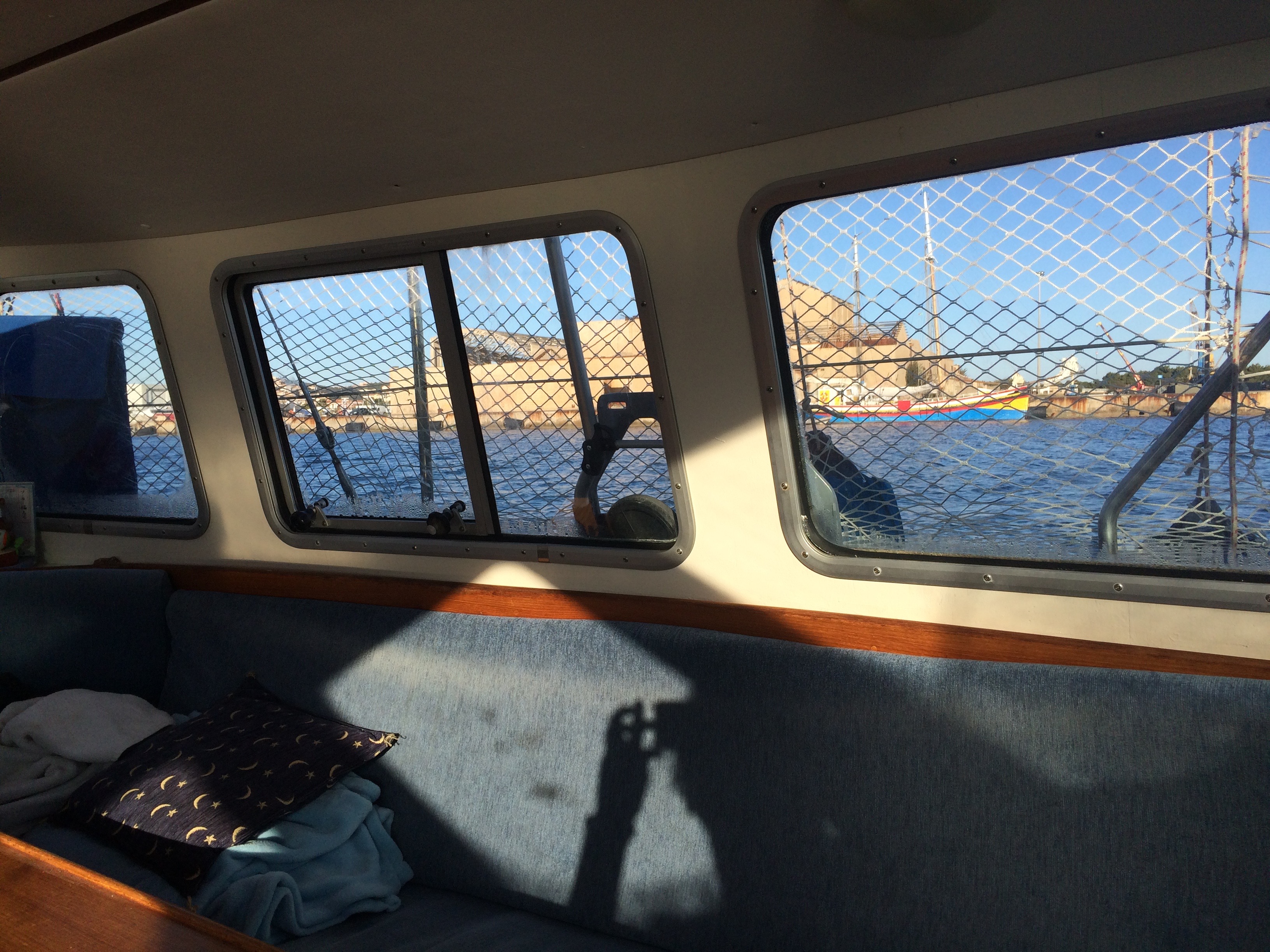 Someone recently said to me she thinks the universe is trying to teach me patience and lowliness („Demut“ for my German readers, I just looked it up because despite my Catholic-only-girl-monastery-school education I had no idea how to say it in English, can you believe it.). Not that I think the universe could care less than teaching us a lesson I do see her point. It has been over 2 ½ months since our engine broke down on the way to Menorca and since we had to return to Sardinia and we are still here. Well, we have moved 22nm to the opposite island’s shipyard but except for that and two test runs of the new engine we haven’t moved a bit.

The good news is the new engine is in, it’s installed and it’s all working perfectly (knock on wood!). The bad news: the autopilot that we ordered over 2 weeks ago and that should have taken 3-5 working days is still not here. And we can’t track it because German DHL and its Italian partner SDA don’t seem to use the same tracking number. The second problem is the weather. It was nice, warm and sunny everyday until the end of last week. But winter is coming now to Sardinia, too (there is snow in Greece! And Rome!) and it’s getting really cold, wet and stormy. As I’m writing this in our regular bar (drinking lots of good of coffee while extensively using their internet) it’s bucketing down and people here are sitting in their jackets and coats.

No weather to do the 250nm 2-day-trip to Mallorca. Even more so since we don’t have reliable heating on board. Our electric heater needs electricity and that a lot, we don’t know how long our batteries will last…

So we are stuck again and it’s driving me crazy, I’m oscillating between exhileration and depression. One moment I’m full of energy – working on the boat, preparing jobs and editing the boys’ footage and then this feeling creeping up my neck, whispering „what’s the point? You should give up, sell the boat, it’s too difficult, this is exhausting and you don’t have any money left anyway so why bother?“ It’s a constant up and down with a dash of madness now and then when I picture myself standing at the dock with wild eyes and wilder hair, holding a machete or an axe and cutting the boat loose. Of course I wouldn’t have to cut it loose, I could just untether the ropes but that’s not really dramatic.

After arriving in Munich following our 10-day-trip to Italy in my Dad’s campervan the four of us disappeared in a swirl of family (Ric and the boys and me to some extent), work (me), friends (all of us) and of course Christmas. I had planned to see as many friends as possible and organize stuff we couldn’t get in Sardinia to take back to the boat. And then I got sick with a nasty stomach flu (Noro) that knocked me out for three straight days. I had been joking about going back to Germany after months of self-inflicted isolation on the boat with only little contact to other people and that we would get sick right away. Well.

At that point we still thought Ric and I were going back to the boat before Christmas, the engine was scheduled to arrive on the 12th of December. But of course it didn’t, not on the 12th, not on the 13th and as the days passed we were anxiously waiting for good news from Sardinia. They didn’t come and it became clear that it wouldn’t make sense to go back before Christmas.

And because being sick was so much fun I thought I’d treat myself to another round and got sick again, this time with a bronchitis – just right on time for Christmas. And I wasn’t alone, both my parents were sick, too, Merry Christmas!

In the end our new engine arrived on the 23rd, Ric and I made the trip back to the boat on the 25th and we have been back on Ponyo ever since.

Not that we don’t have enough to do, there are always hundreds of jobs we need to take care of. Ric installed our new AIS (a helpful device that helps us keep track of other boats and vessels in our vicinity), built three bookshelves and fixed our boiler. 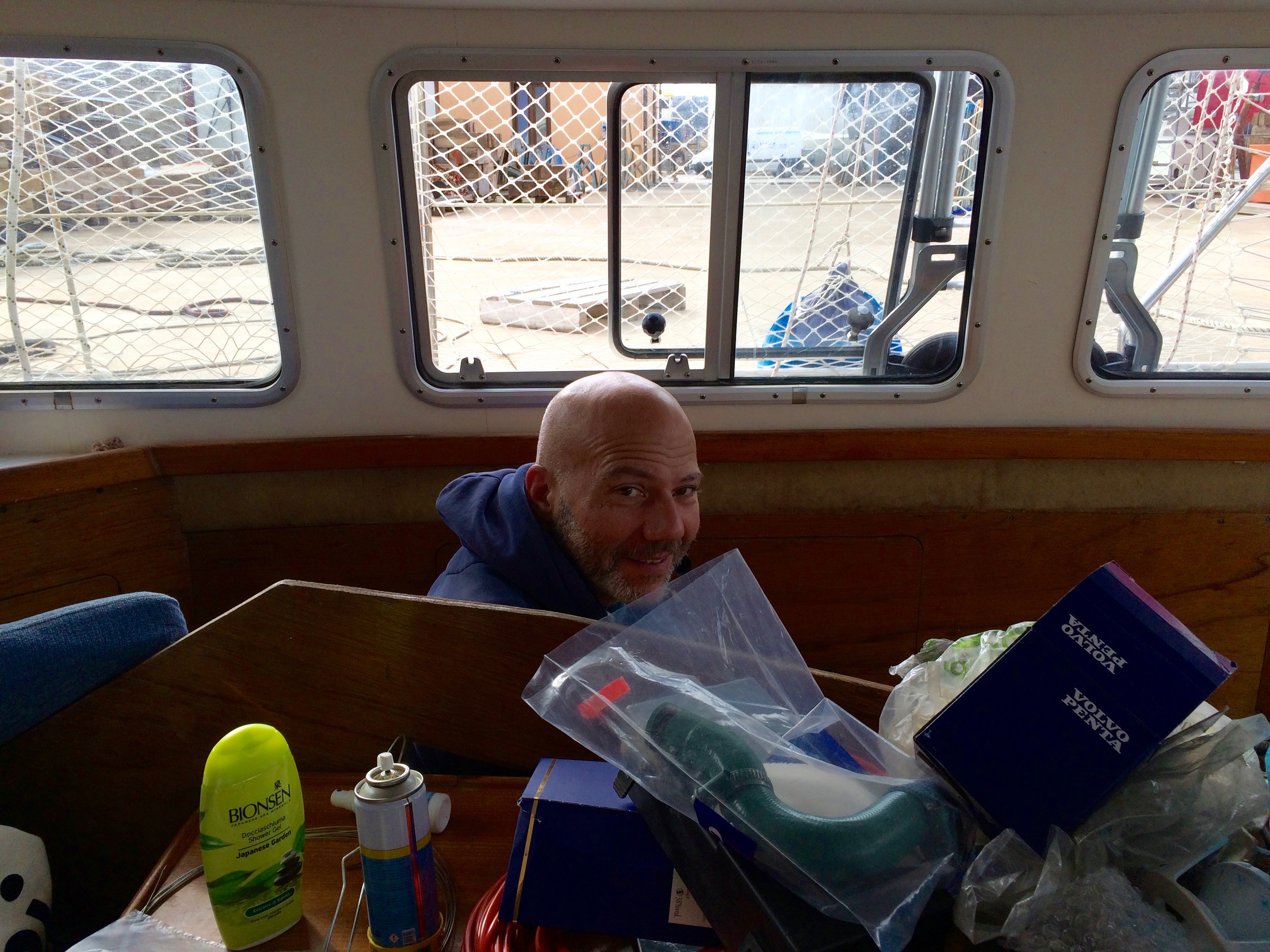 Chaos on the boat! Ric is trying to get rid of some stuff and digging deep… 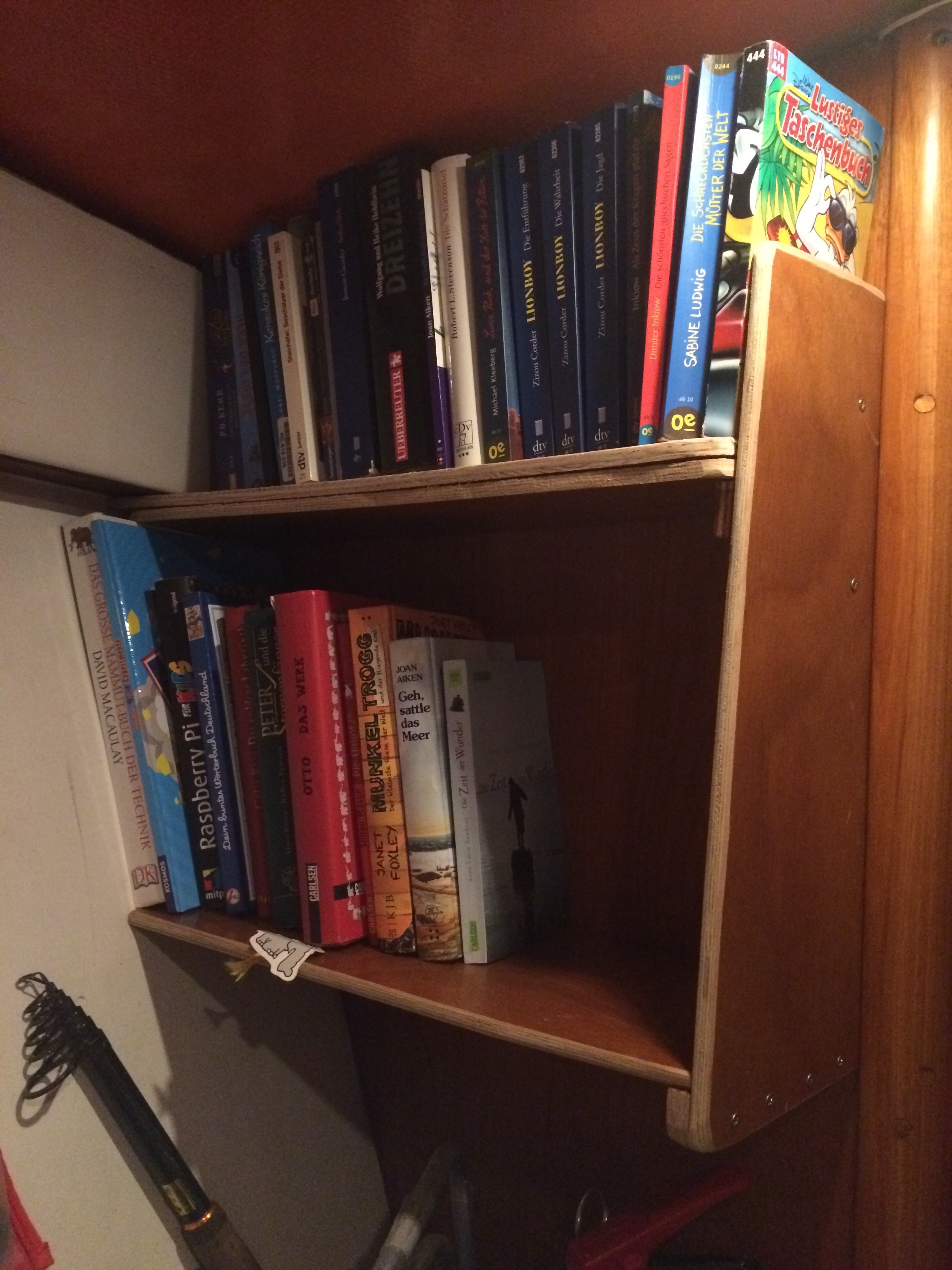 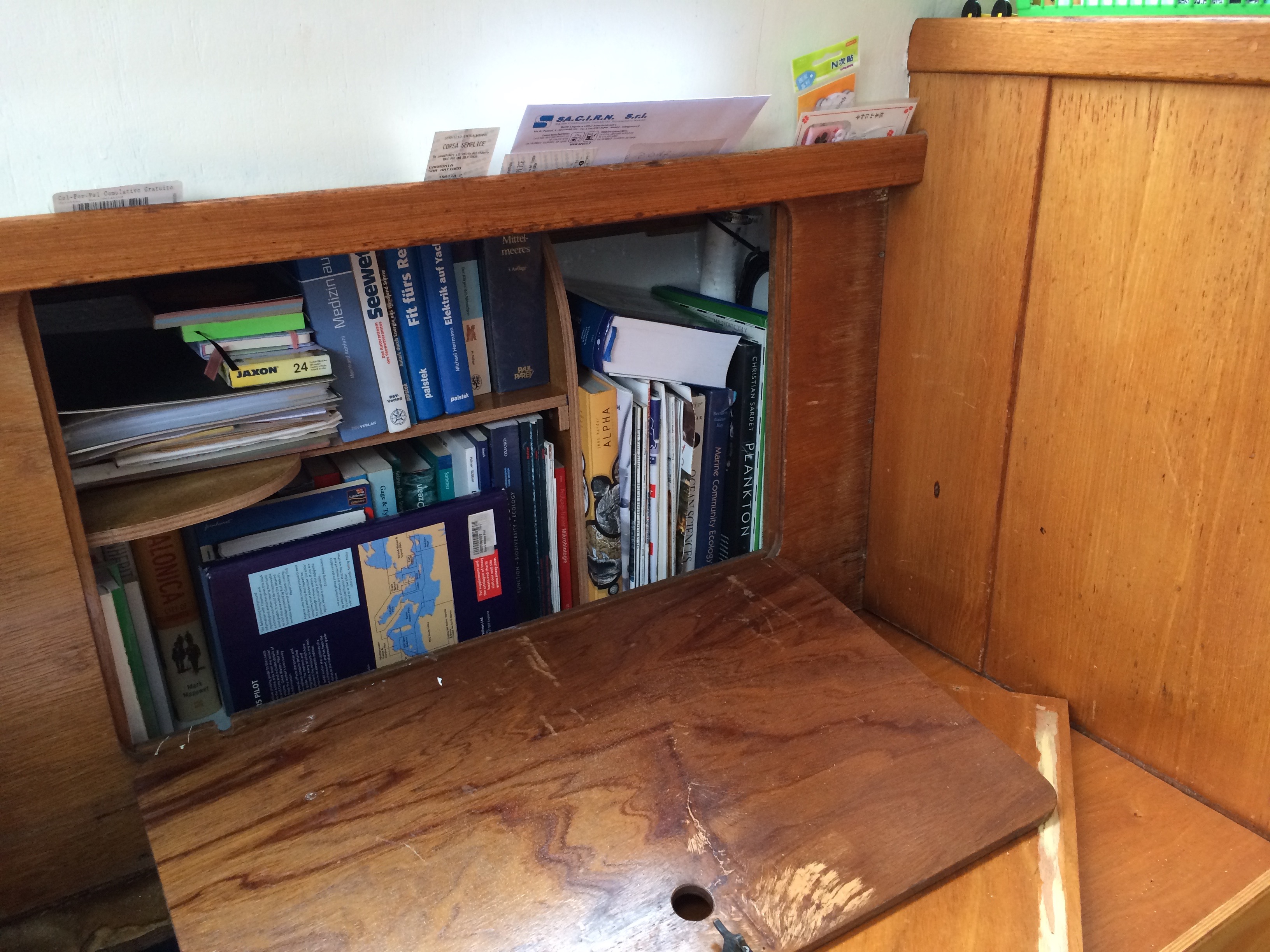 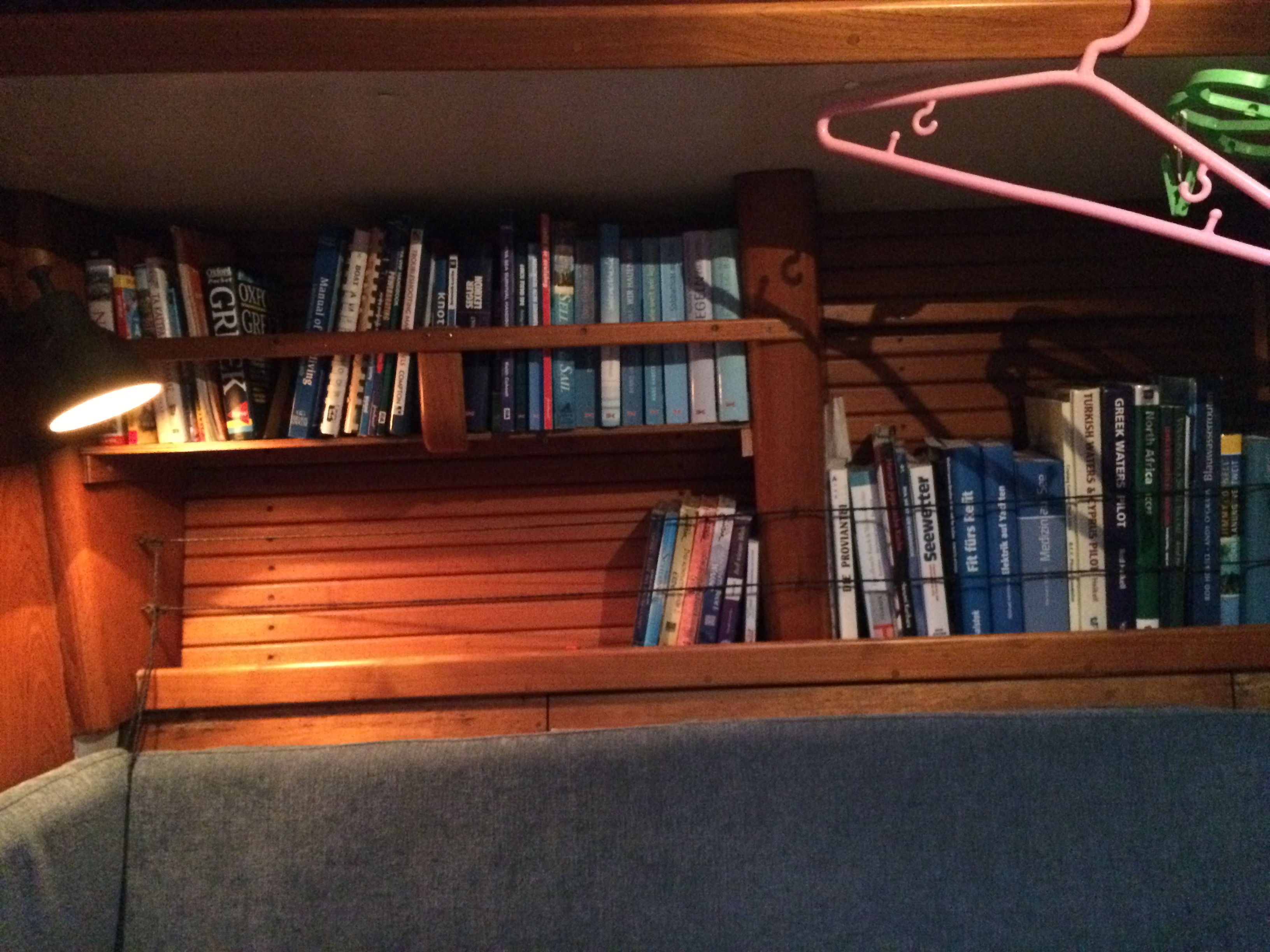 And we had a surprising New Year’s invitation from the shipyard boss who made a reservation for us in his regular fish restaurant and even had the shipyard guard Marco take us there, these people are absolutely lovely! Food was fantastic maybe except for the Sardinian goat cheese. A delicacy in Sardinia (as I found out later), cheese made of the fermented content of a goatee’s stomach. 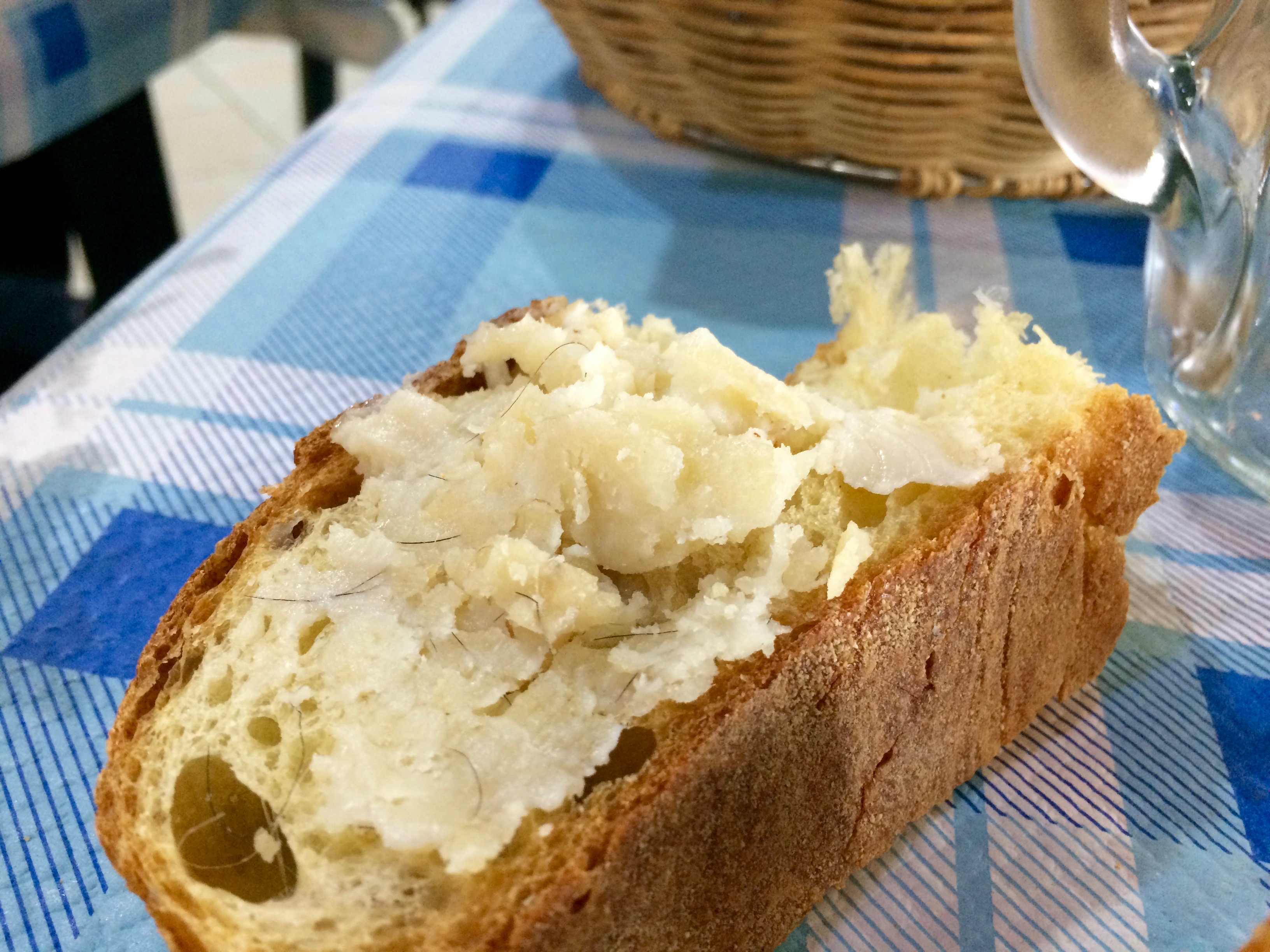 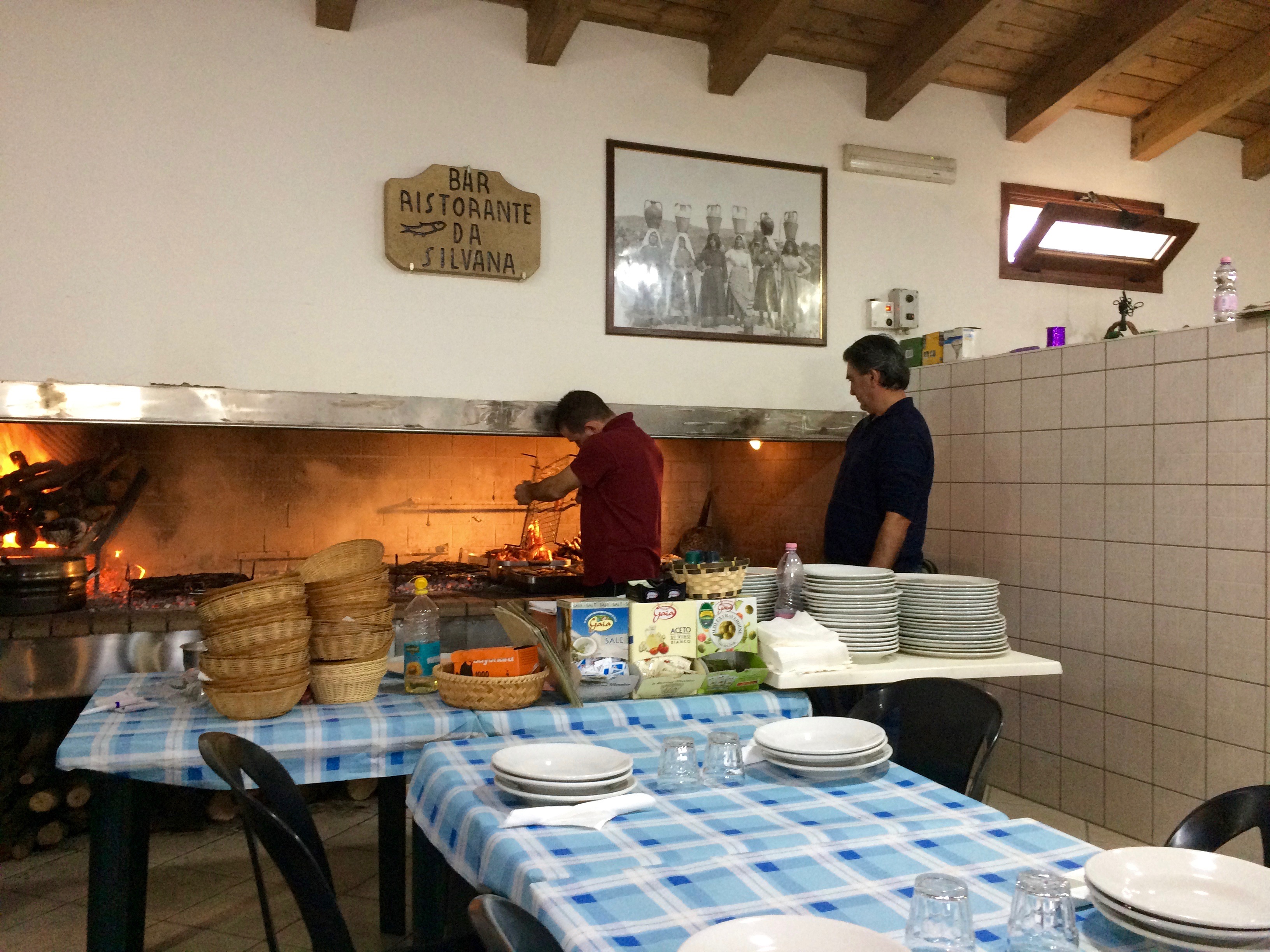 Well, what can I say. We are still here, surprise surprise! Meanwhile I have been to Belgium for work and I brought Jari back on my return. He had a good time with his friends and grandparents but Christmas holidays are over now in Germany, his friends are busy with school and he can’t hang around forever. There was boat school waiting for him here and more things to keep him occupied. 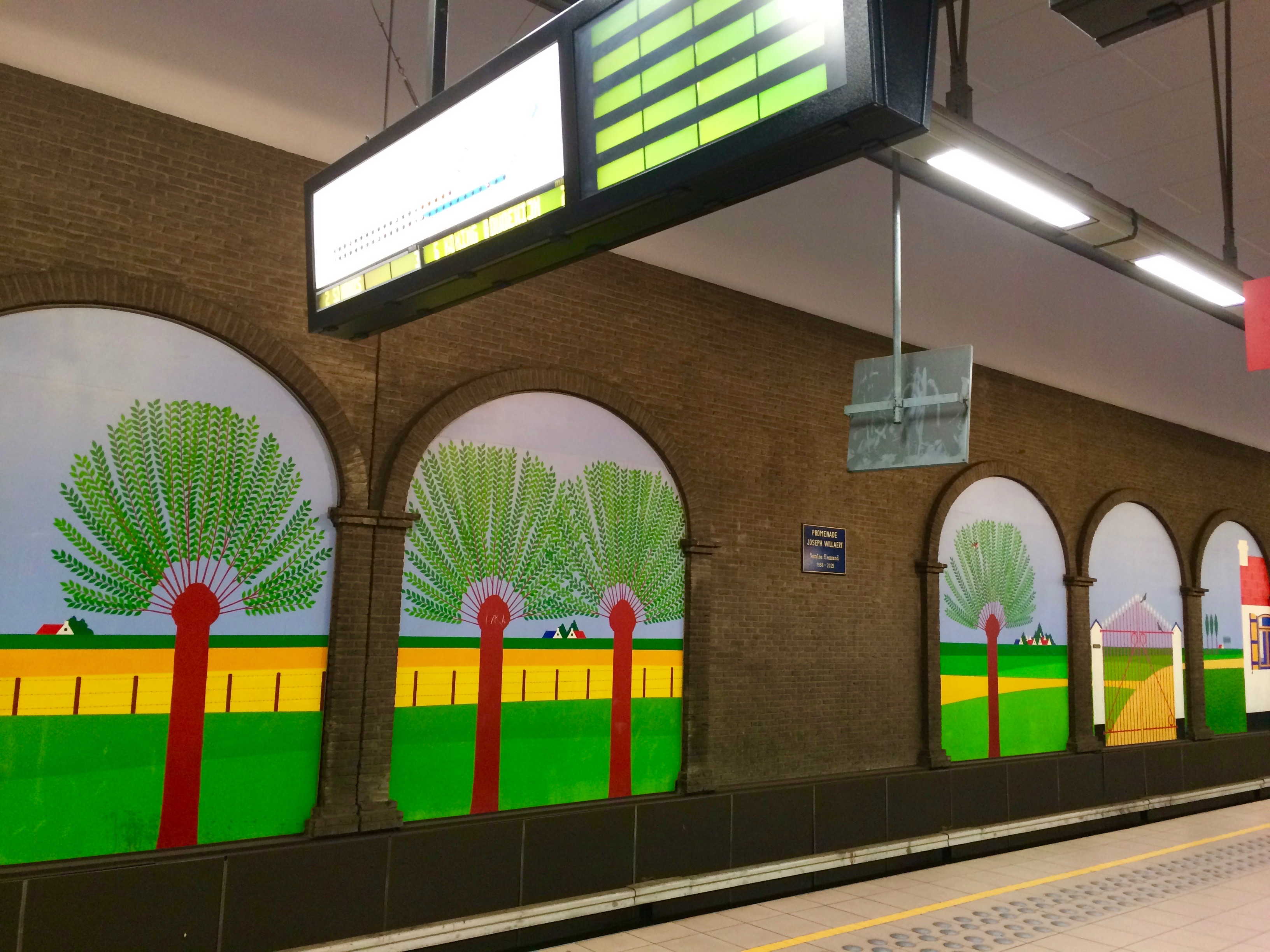 Brussels. Pretty metro station but not sure yet if I like the city. 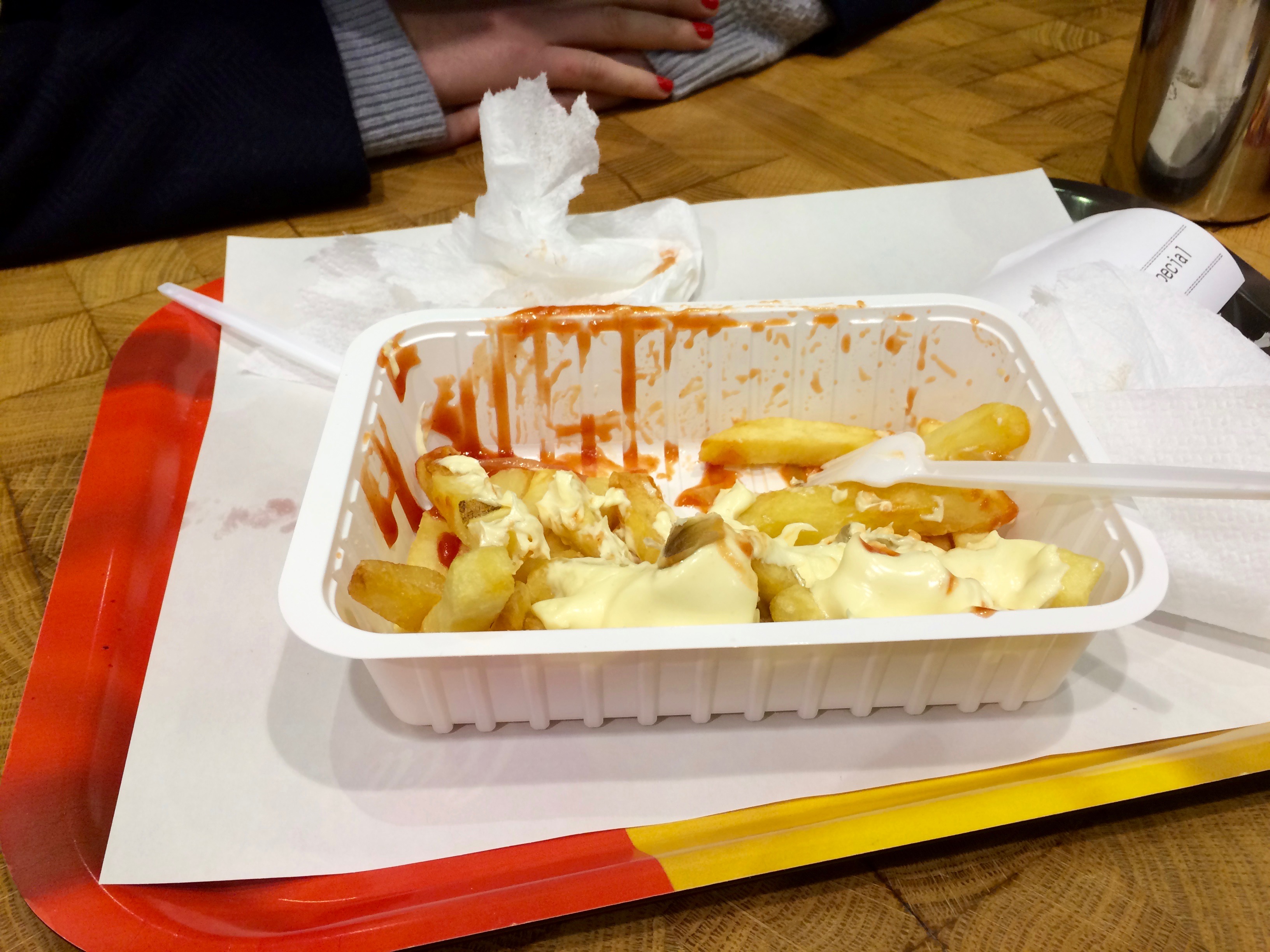 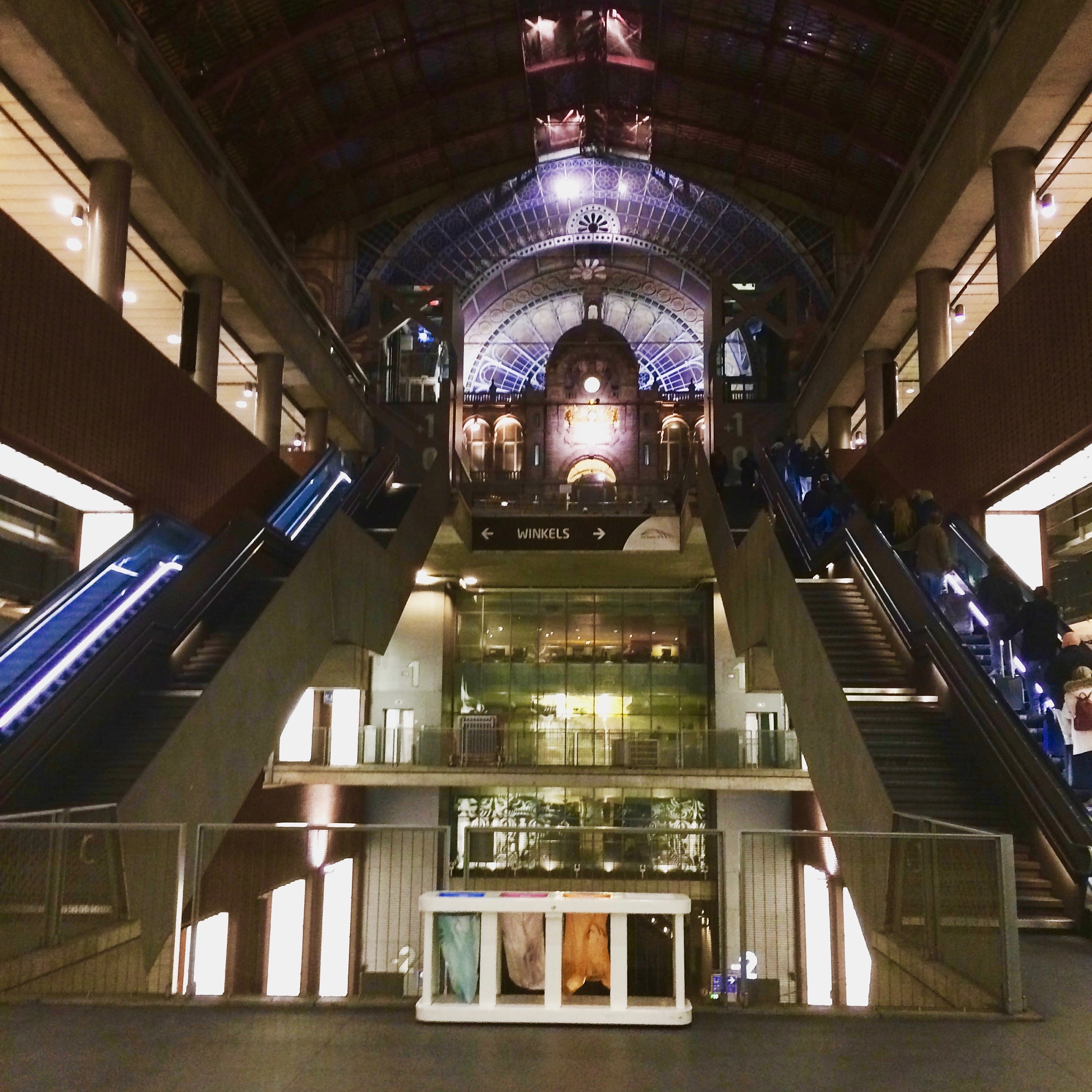 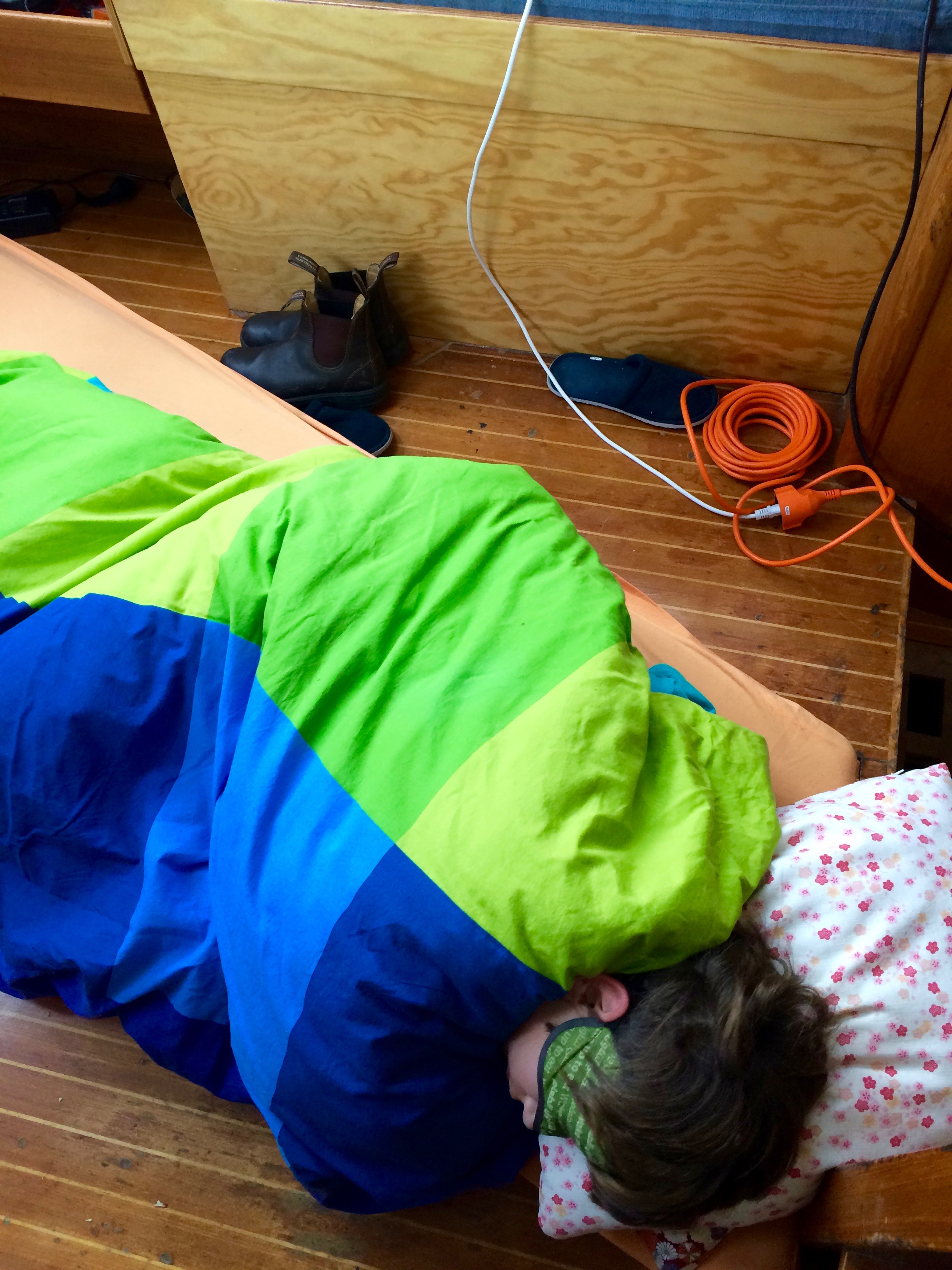 It’s really cold in Sardinia now, Jari is camping in the deck salon – the warmest place on our boat!

And more good news: the autopilot arrived and even though it was much more difficult to install it than anticipated (of course connections to our system weren’t compatible) but Ric did it. We are ready to go. Except that the weather is really giving it to us now, we are sitting on the boat which is behaving like a wild pony with 10bft. gales accompanied by lightning and thunder. It should be over by tonight and hopefully the waves outside will have calmed down by beginning of next week so we can finally, no sorry FINALLY go to Mallorca and pick up Yannick.

It’s just the most frustrating thing when you are traveling to be stuck and I am so much done with being stuck. 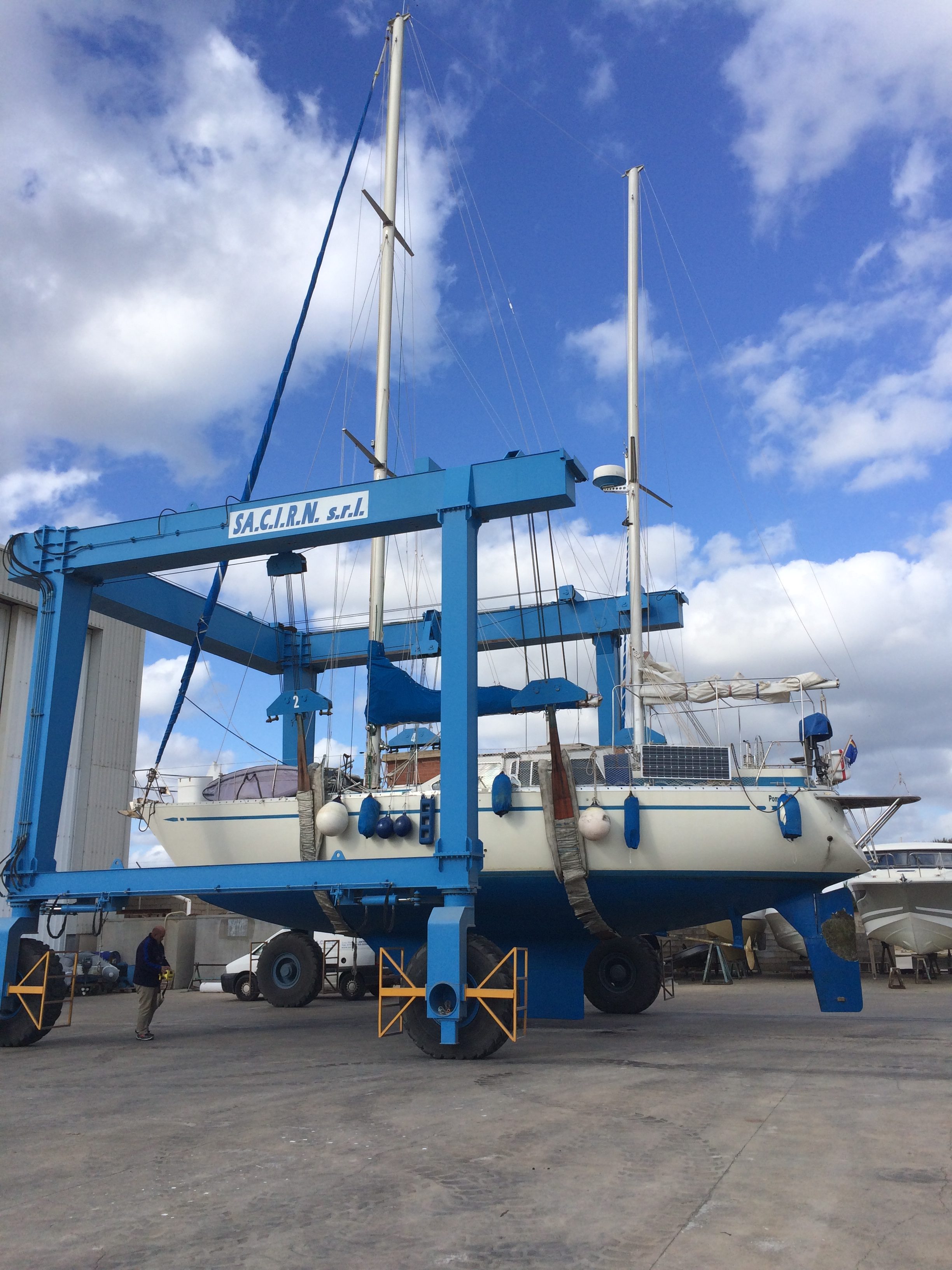 Of course our propeller didn’t fit: Ponyo needed a haul-out and a new prop!