Engine troubles and rescue missions in the South of Sardinia! 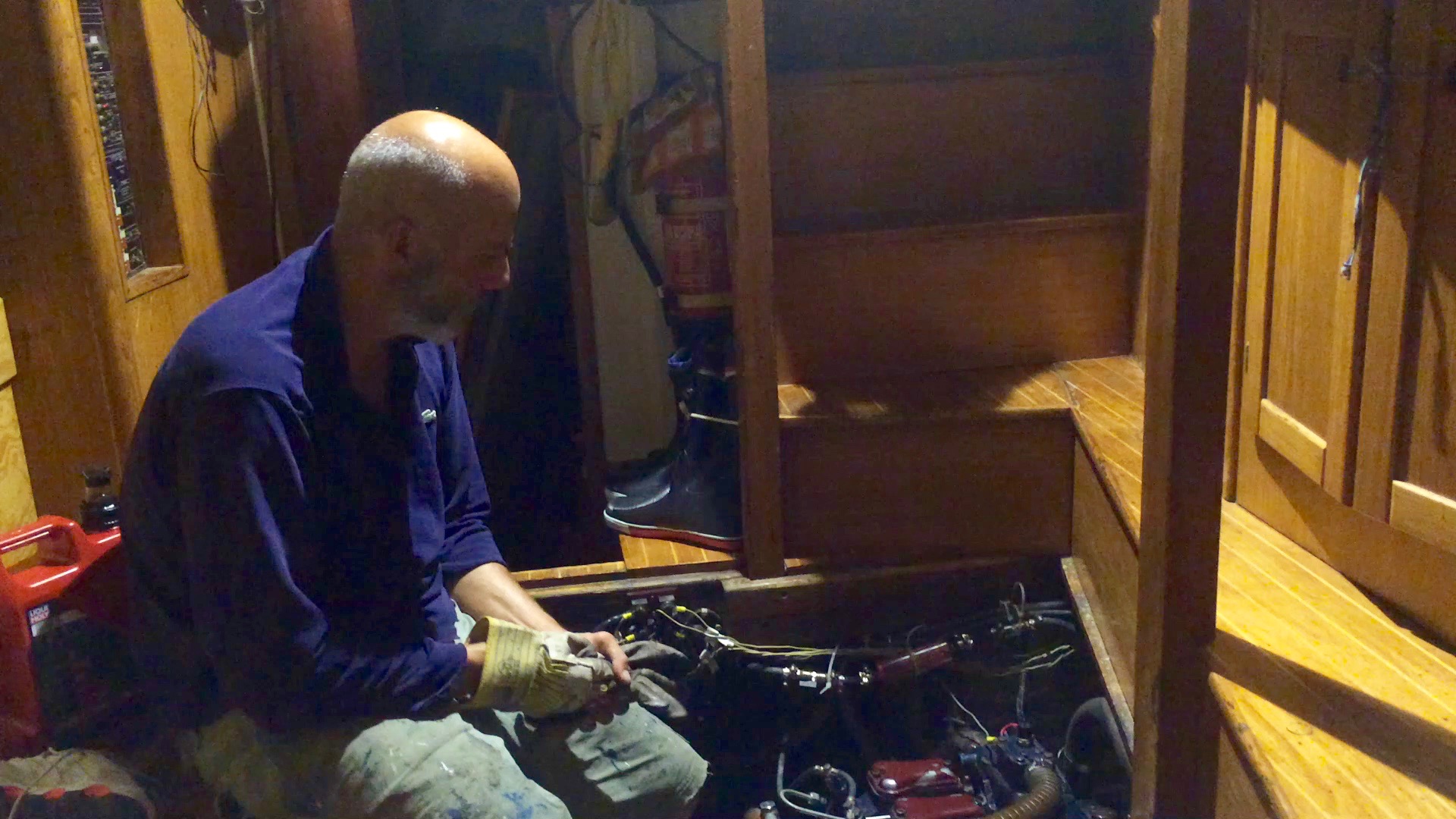 Finally, after 5 long weeks, I have my laptop back and I am as happy as a clam and I can continue posting!

Right now we are stuck in San Pietro, a lovely tiny island Southwest of Sardina. Why? Well, our engine died. We were on our way from Sardina to Menorca and we could sail for the first 60 or so miles when the wind died and we turned the motor on. After a short while it heated up quickly and we found the cooler spitting black oily water, not good. After trying several things the engine wouldn’t even start anymore, also not good, really really not good. We were afraid to have a seized-up piston (Kolbenfresser for the Germans) and to make it any worse so we abandoned any further attempts and hoisted the sails.

Since at that point only 70 miles separated us from Sardinia and Menorca was still more than a hundred miles to go we decided – with a heavy heart (nothing more frustrating than going back) to return to San Pietro. The lack of any kind of autopilot, wind and predicted gales for the following night were arguments too big to ignore.

We informed the coast guard in Sardinia via Satellite phone that we were coming back without engine and that we would need assistance getting into the harbour. Apparently someone somehow misunderstood and thought we needed saving so at 2 a.m. a coast guard motorboat came racing towards us, tied up alongside and beckoned us to come aboard and abandon our ship! We explained that all was fine so in the end they escorted us for 4 hours before they finally took off at 6 in the morning. Late in the evening of the same day when we finally arrived Sardinia (26 hours for 70 miles!! Jari was so lovely to make pancake for our moral) coast guard was awaiting us. We had to make report and leave them a written statement that we never released a Pan-Pan, Securité or Mayday (all radio messages with different urgency). And they told us that they weren’t going to let us leave without a statement from a mechanic that the boat is fine and with engine. So we are literally stuck, we couldn’t even sail anywhere. 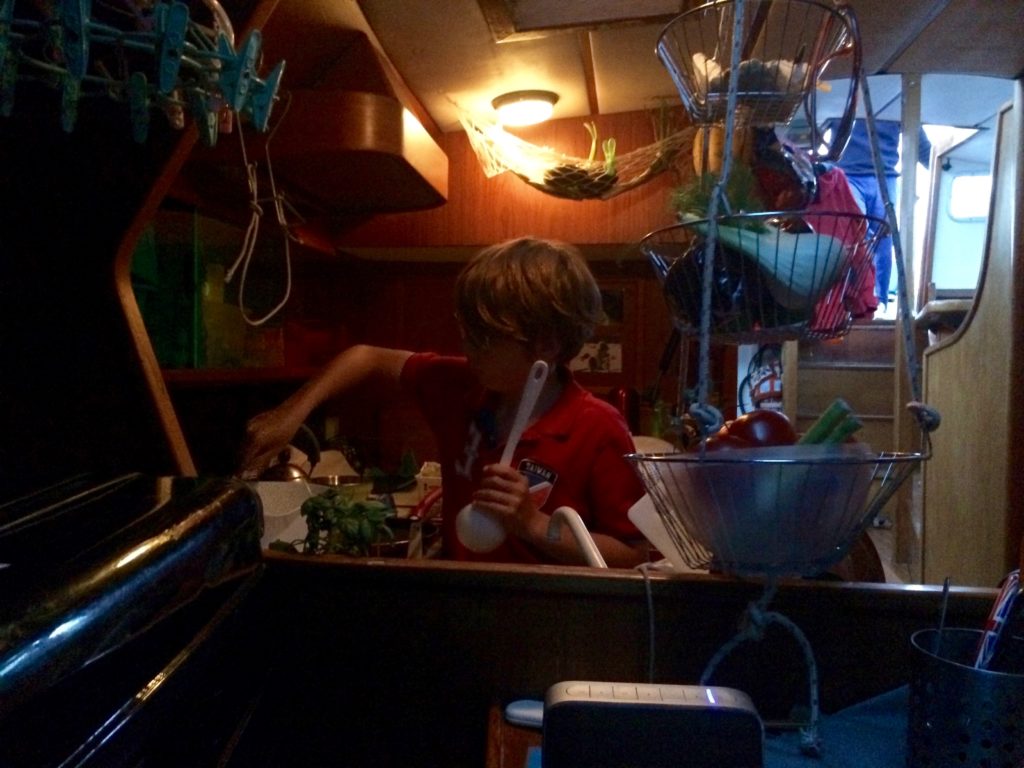 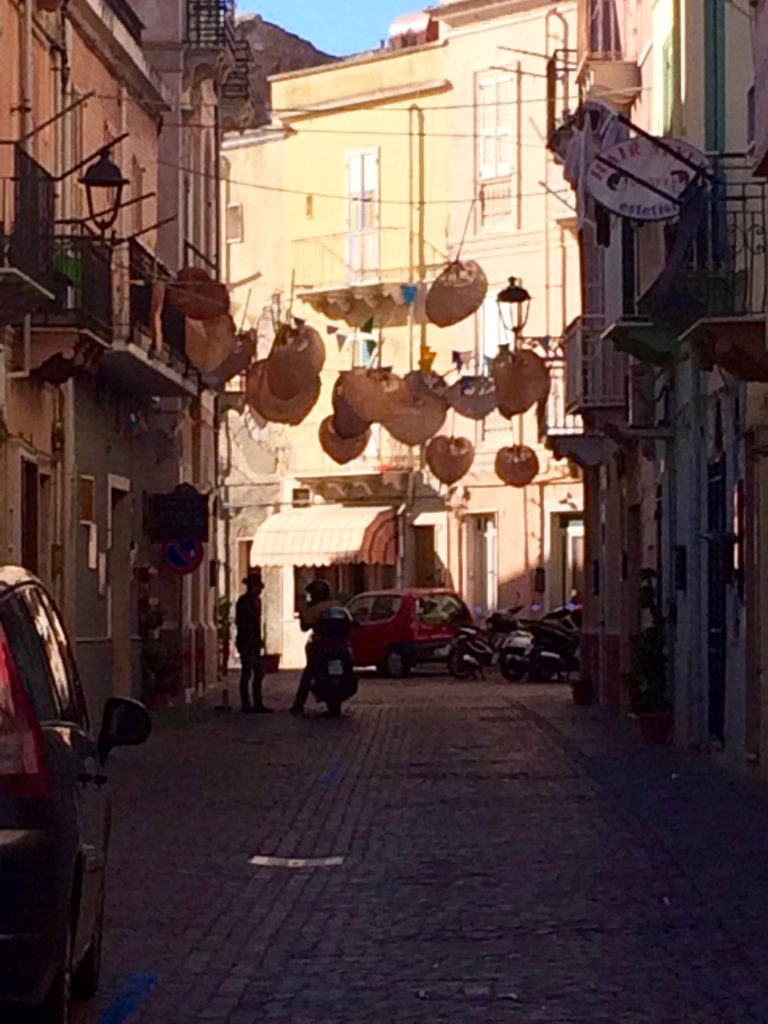 Carloforte – not the worst place to be stuck

Back to the engine: It’s not completely completely dead but something(s) is (are) seriously wrong and if we decide to find out it will already cost us quite some money. And then it wouldn’t be clear if it was fixable since there aren’t any spare parts anywhere in the whole world for a 30 year old Arona. So in the end we had to bite the sour apple as we say in German and go for a new engine. That was a week ago and not much has happened so far, this is Italy after all 🙂 But we are in good hands, I think. Marina Sifredi’s Giuseppe and Carmela are lovely and doing the best they can to help us. And Carloforte is a really nice place to be stuck.

Lesson learned for our next used boat purchase (yeah right): Don’t buy the boat if the engine type is out of production. Or calculate a new engine into your budget. If it’s working fine, good. But the minute it starts making problems, invest in a new one. We have lost so much time, money and sweat with this old thing, it wasn’t worth it. But how boring would life be if you knew everything in advance, right???

However, we are fine again. It was a big shock, especially since we hadn’t planned a new engine into our budget at all. Luckily my father could help us out and borrow us the money, otherwise this could as well be the end of our adventure, at least for now. Well I don’t want to be toooo optimistic just yet – we still haven’t seen the cost estimate, so fingers crossed!!

We are using the time to fix some other things, do a lot of boat school and catch up on editing videos (the boys) and filling the blog (me). 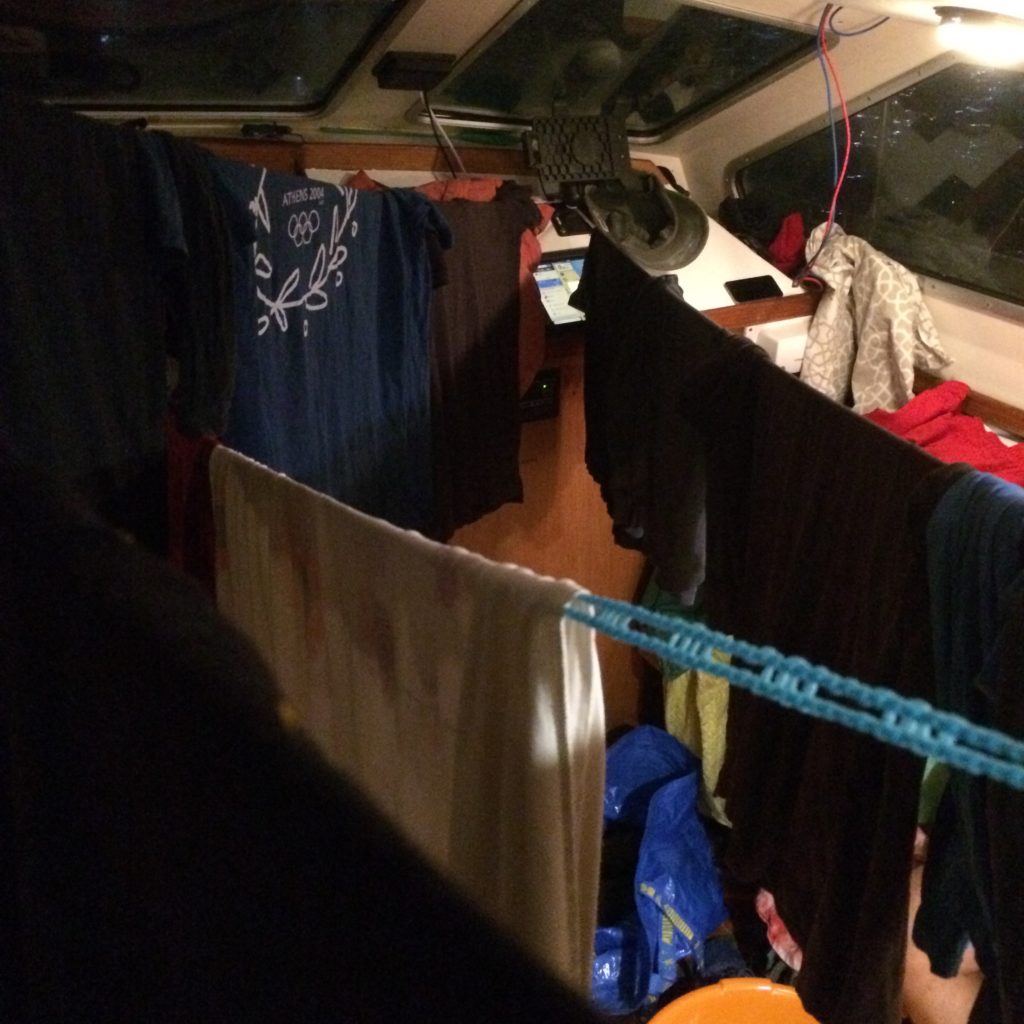 That’s what happens when you do 18 kilos of laundry at the only rainy day of the week and you have 20m2 of living space. 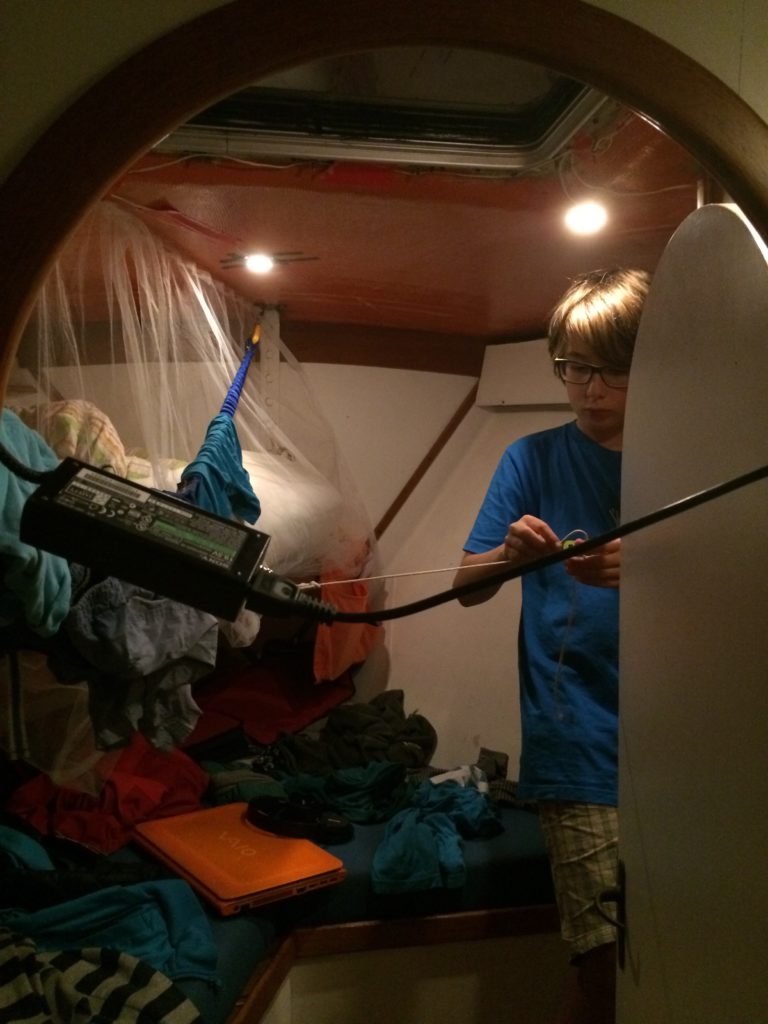 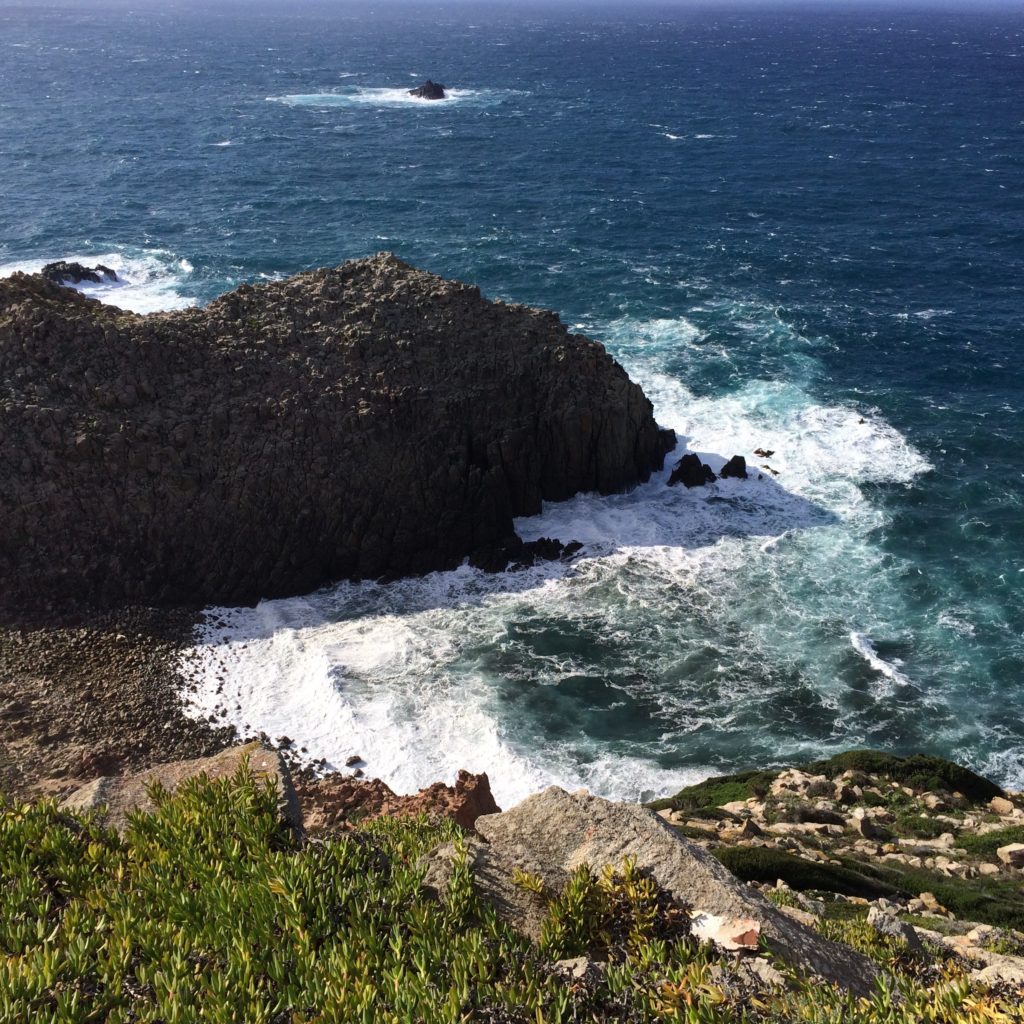 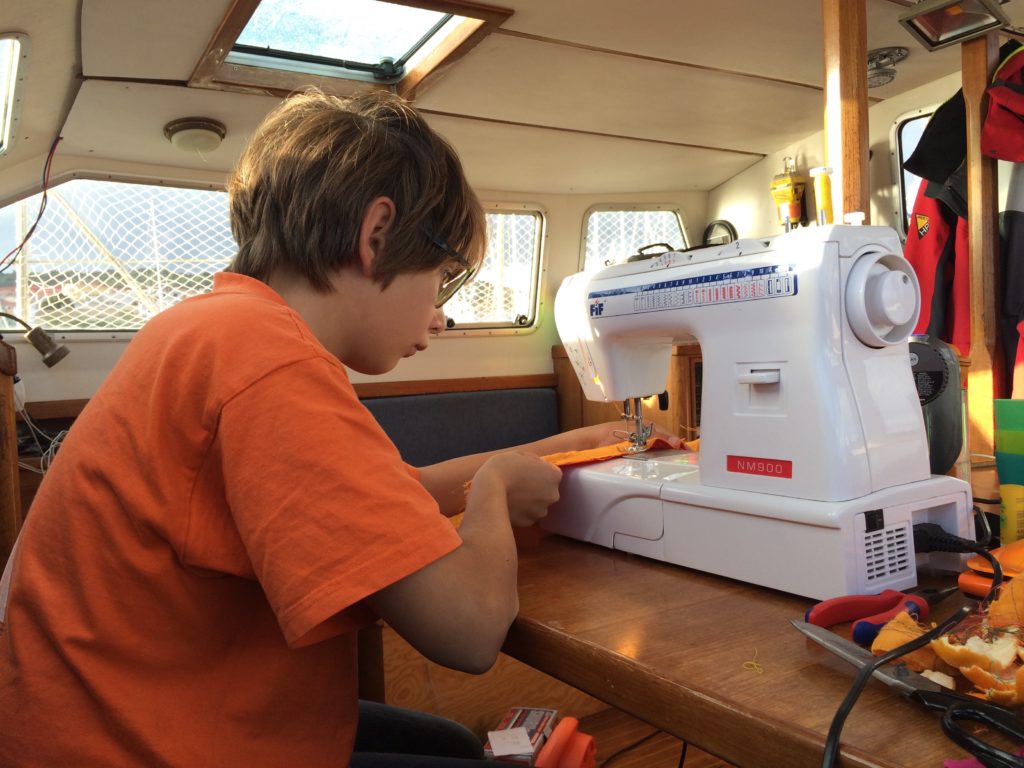