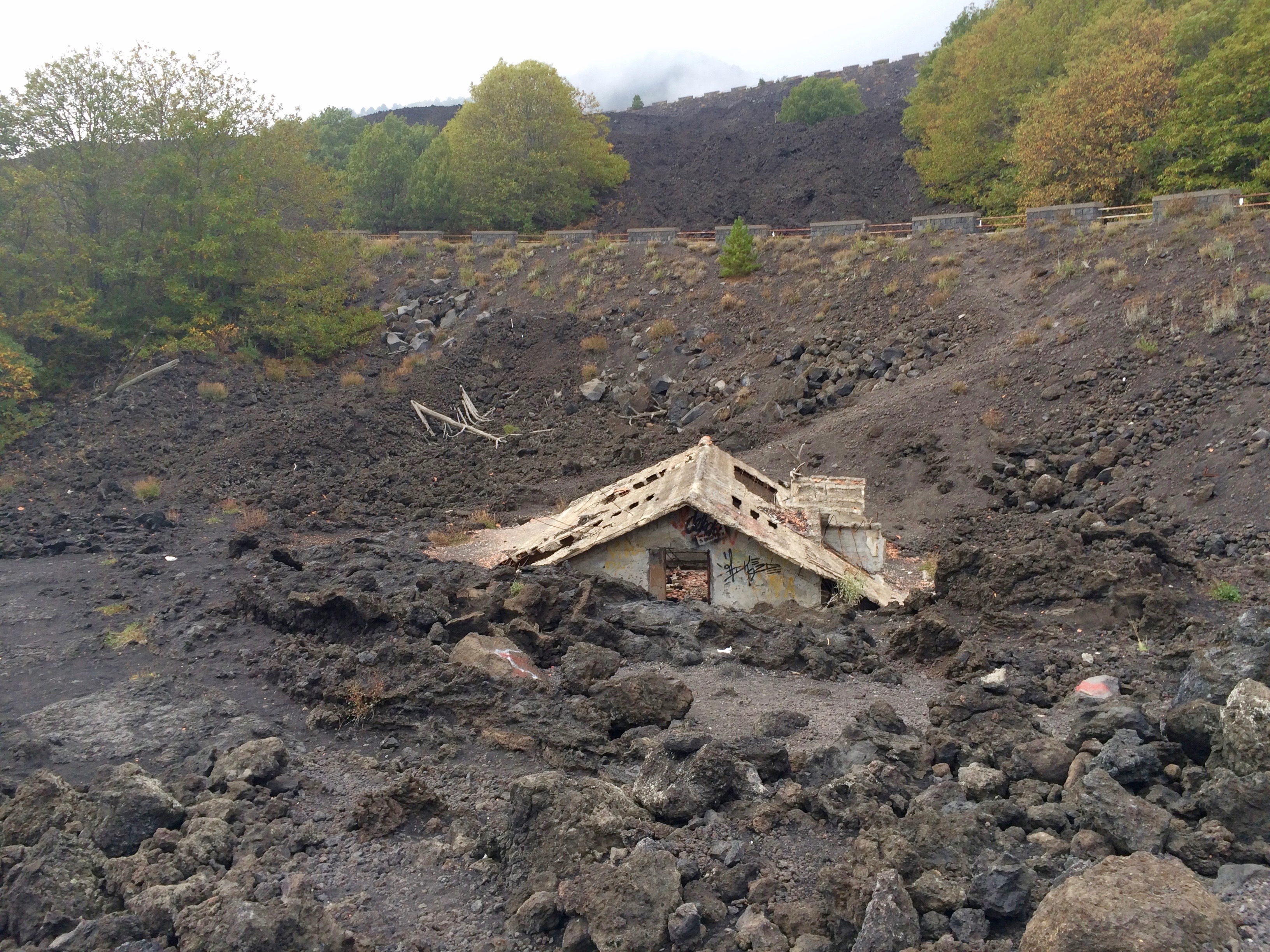 After leaving Corfu with yet more thunderstorms and strong wind we arrived in the South of Italy after a super exhausting night of waves, more wind and – of course – hand steering (actually poor Ric had to steer most of the time, he was up for 48 hours straight. Ok, we really really need an auto pilot.).

Our first mooring there was in Capo Rizzuto in a world-forgotten tiny port in the very South of Calabria. We had a super delicious and cheap ‚Welcome-to-Italy-Pizza‘ there. We only stayed one night and continued the next day to Roccella Ionica, even more South in Calabria. The marina there offered bike rental for free so we explored the little town with its stunning fortress by bike. It soon became clear why it was free to take their bikes, though. Mine had no noticeable breaks, going downhill was lethal – I had to descend and push (rather pull) the thing down. After this exhausting exercise we made a stop at the deserted beach with its crystal clear water and the boys were playing in the waves. Even Yannick after overcoming his initial 20 minutes of ‚I’m 15 and way too cool to think that playing in the waves is fun‘ 😛 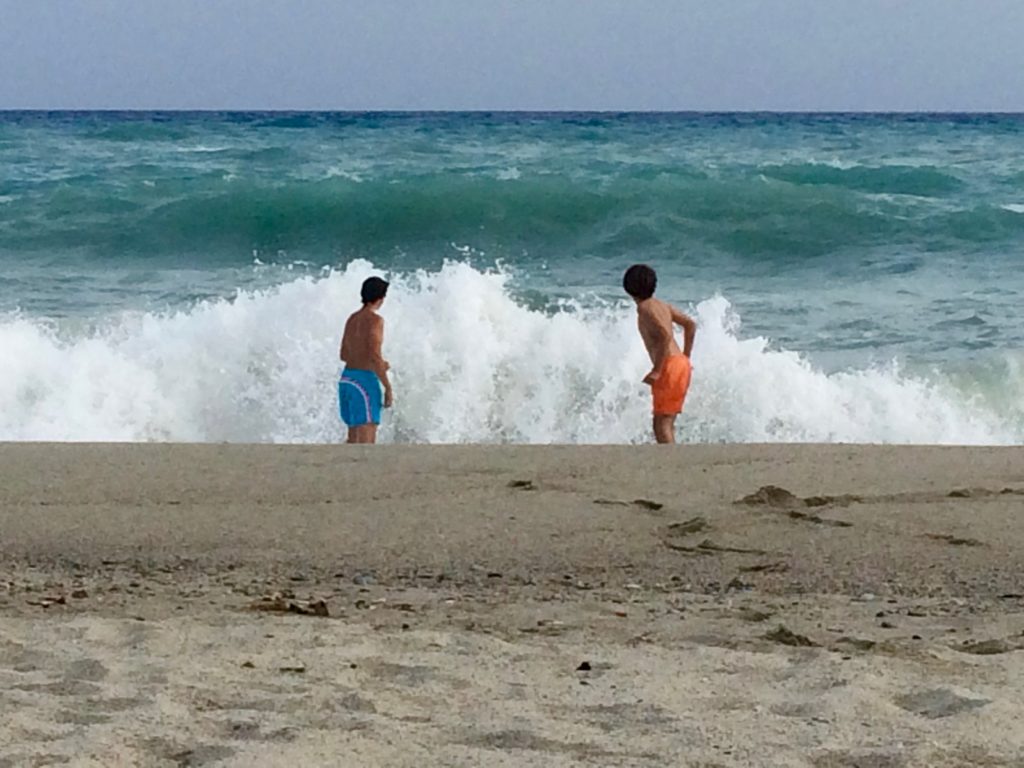 We had to stay two more days, wind and waves were against us. We used the time to do more fixing and Ric pulled Jari up the mast to change the Windex light and our malfunctioning deck light. 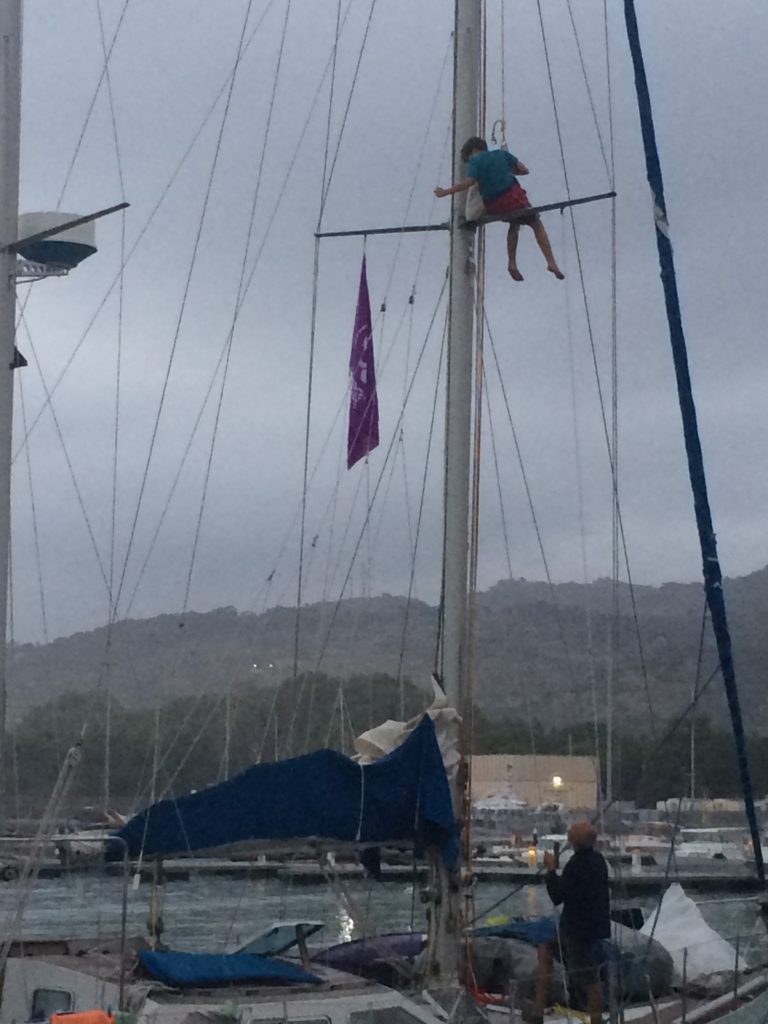 As soon as the weather changed we were off to Sicily. Originally we had planned to round Sicily from the North but since that would have meant sailing against the wind – again – we unceremoniously changed our plans and went South direction Catania. The sail there was excellent except for the second half of the trip when all of a sudden a force 6 wind and waves from the side made me feel quite unwell, börk. In Catania we rented a car for one day to visit Etna, with 3000m the biggest volcano in Europe and it really was impressive and an interesting geology lesson for the boys. We saw a buried village and a lot of cold lava covering the slopes of the volcano. 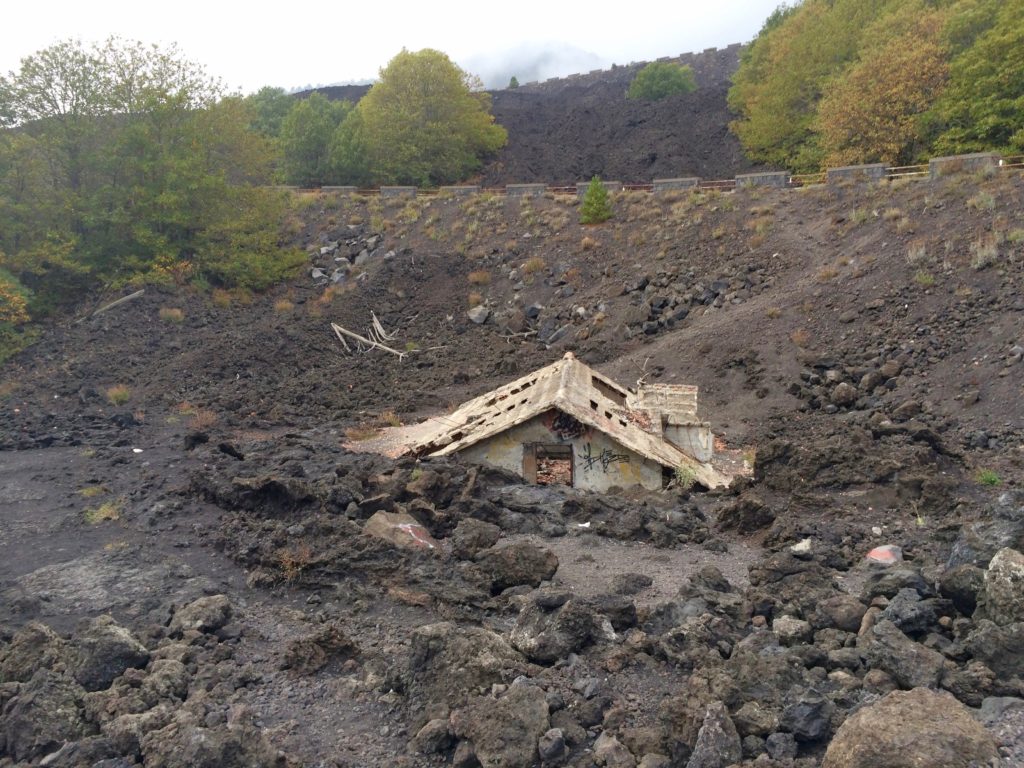 A buried house on Mount Etna 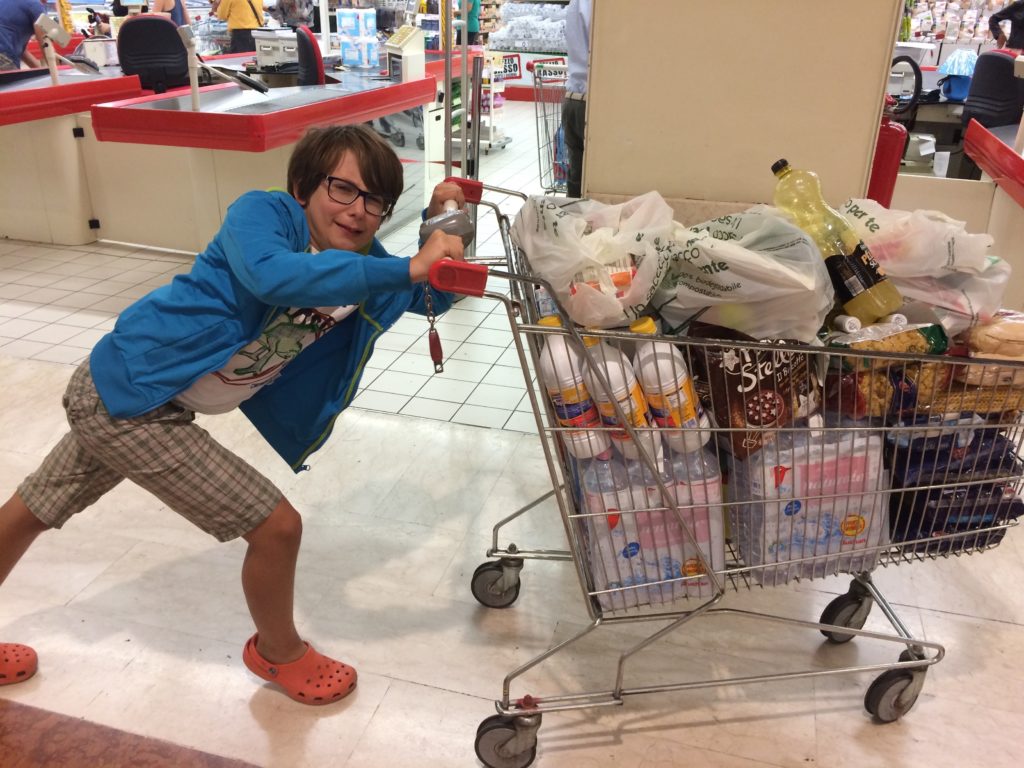 Cool side effect of the hired car: food shopping and provisioning big time!

Next stop Syracuse and definitely our favourite berth so far: Directly at the public pier of Syracuse’s old town Ortigia and for free!! Syracuse used to be cultural center of the Mediterranean 2 and a half thousand years ago and was big opponent to Athens back then. There are still a lot of ancient buildings from 500 BC – history alive! And Ortigia’s little alleys and streets are so charming we could have stayed weeks longer. 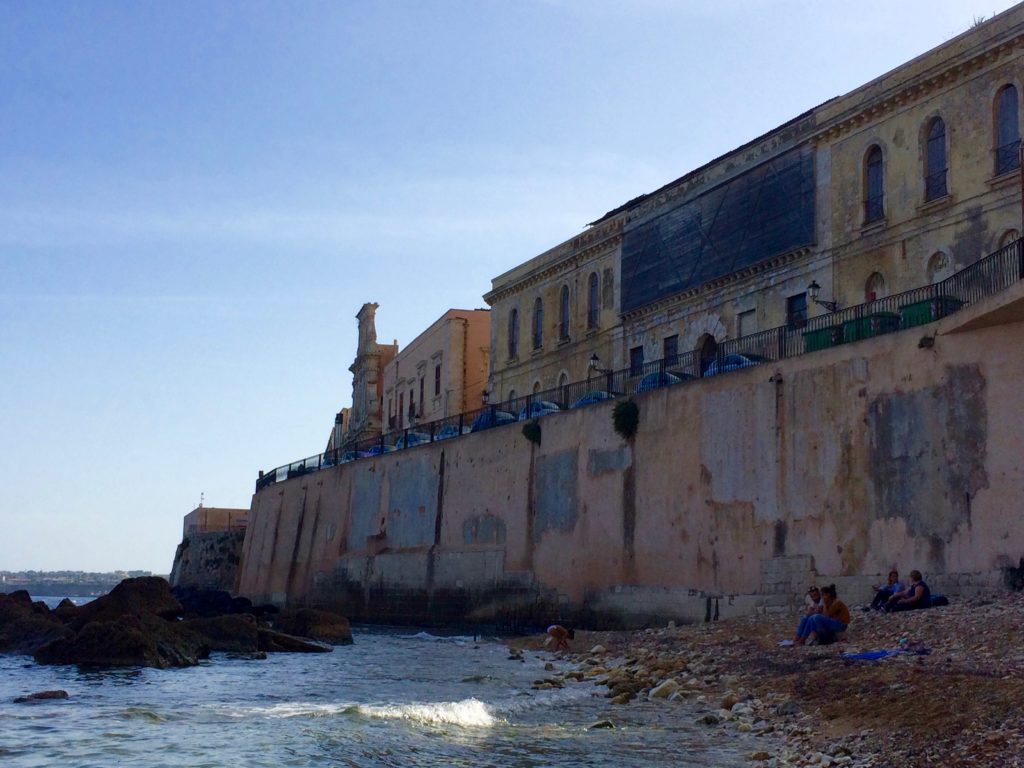 View from Ortigia’s city beach, my favourite spot during the day 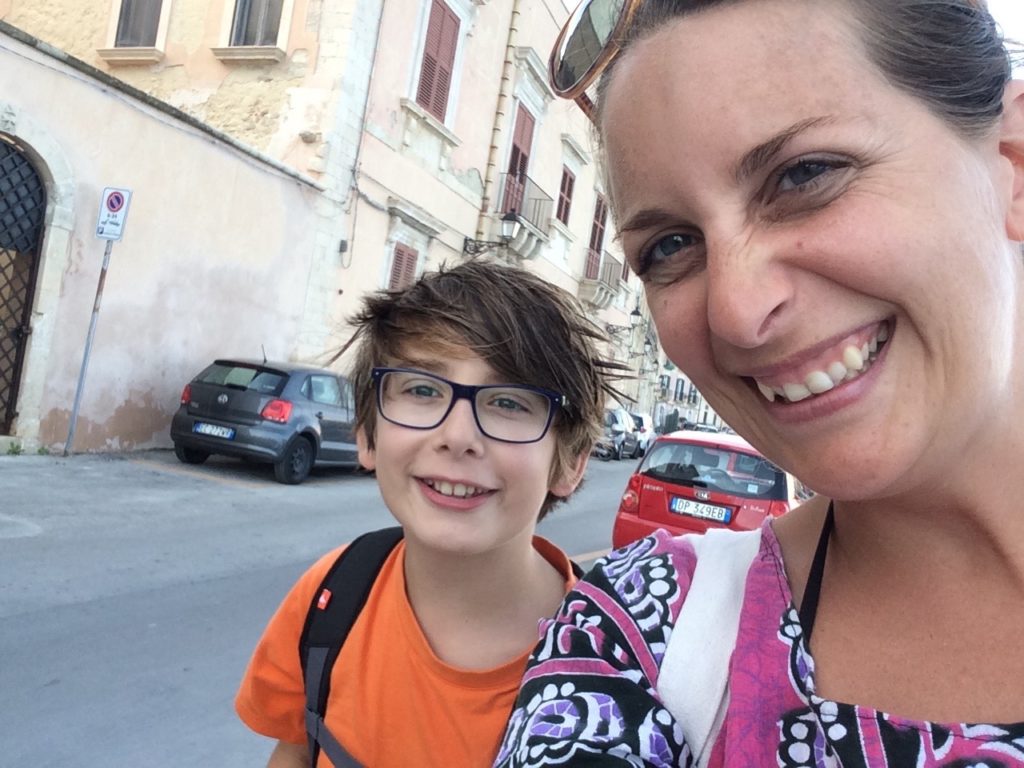 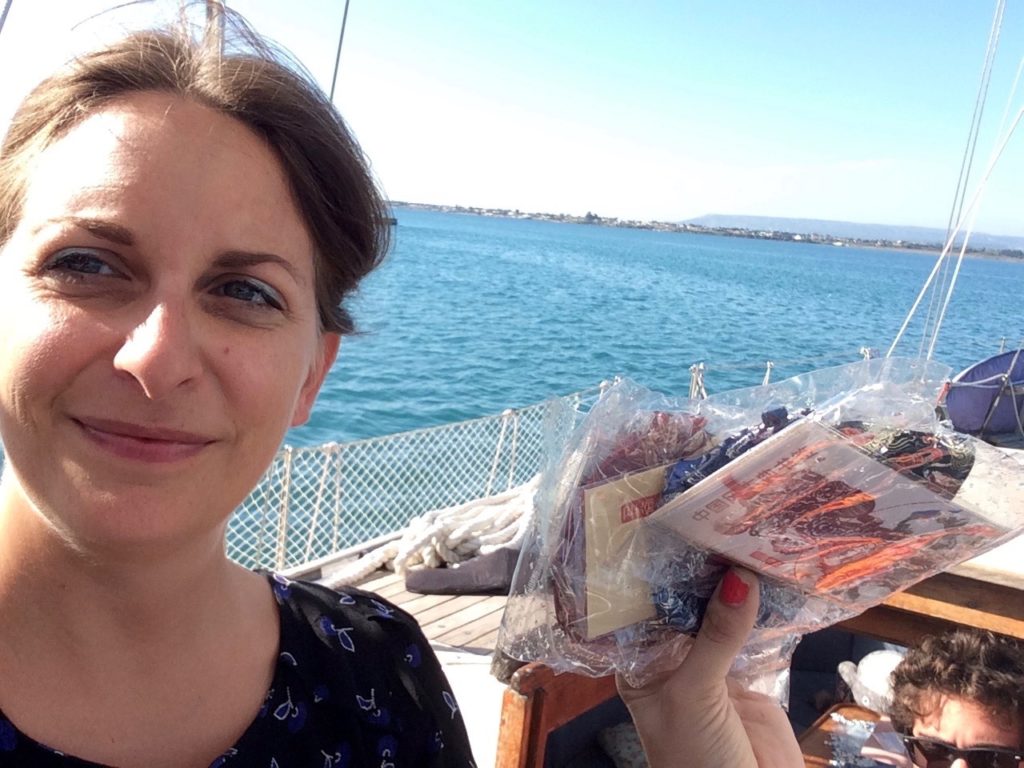 2 lovely Chinese ladies were so fascinated by us that they came back to the boat early in the morning to leave us presents: Chinese purses, thank you!

It was super hard to leave Syracuse, there was so much more to discover. But my father was going to come to Cagliari, Sardinia in less than a week to celebrate Jari’s 12th birthday and we still had 250 nm to go! So off we sailed and this time I mean it, we really sailed a big part of the whole trip. Without any trace of sea sickness and only a couple of hours of thick fog we arrived the South East coast of Sardina (Capo Carbonara).

We had to spend a few nights at anchor to ride out force 8 to 9 winds. There were 2 other yachts with us in the same bay and one of them almost lost their tender the day after the storm. Lucky for them we are super nice and heroic people and Ric and Yannick were super fast to throw our own tender into the water, mount the outboard engine and catch our neighbors‘ expensive inflatable boat before it could take off to North Africa. They were pretty happy and gave us 2 bottles of wine to express their gratitude, one of them was terrible by the way (I mean the wine). We should have asked for their autopilot instead. 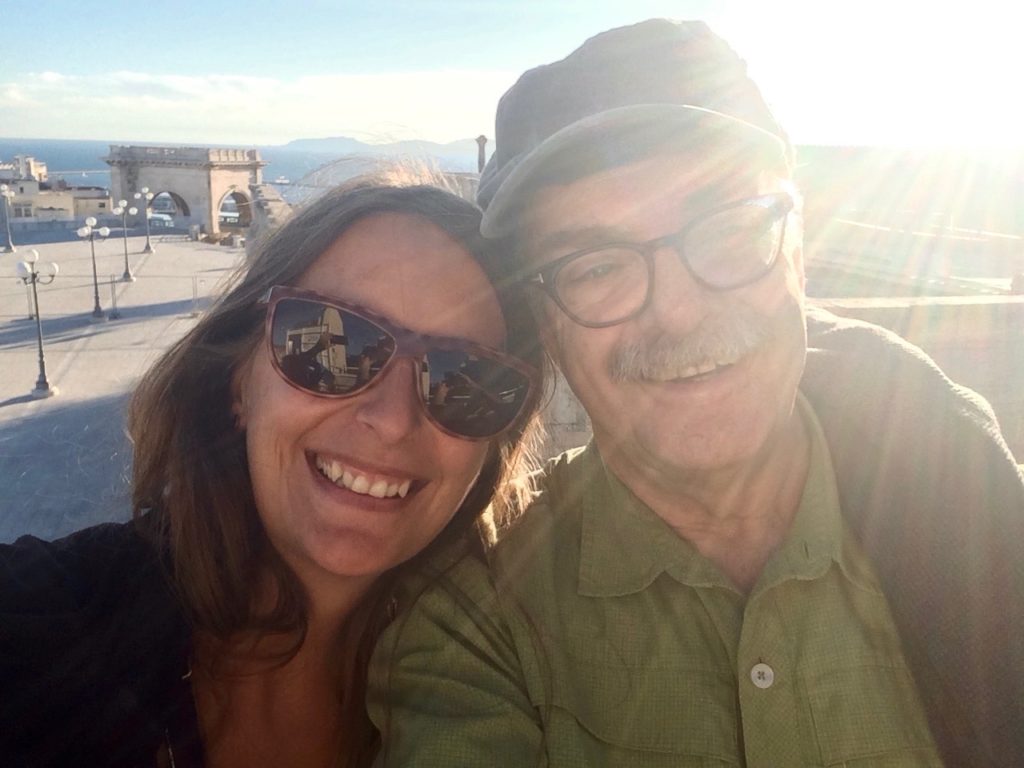 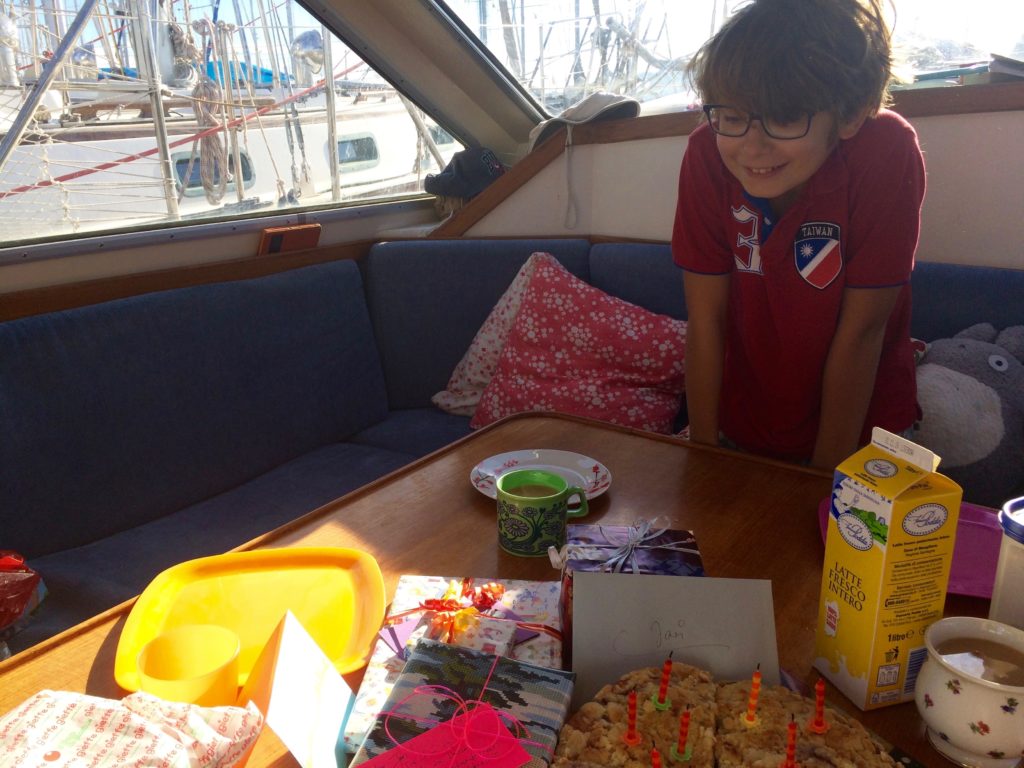 This was our second time in Sardinia’s capital, Cagliari, and it was as pretty and charming as I had remembered it. After picking up my Dad from the airport we prepared everything for next day’s birthday but also for our next big trip to Mallorca. Little did we know that this trip wasn’t going to go the way as we were expecting. But for the moment we were still happy celebrating and planning our passage…